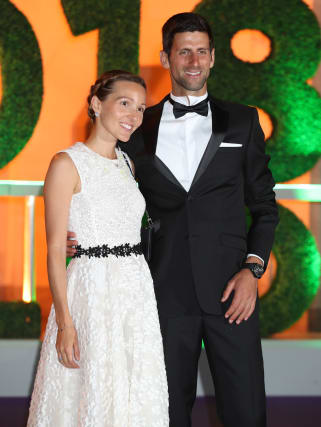 Novak Djokovic and his wife Jelena have announced they will donate one million euros to buy ventilators and other medical equipment to fight the coronavirus in Serbia.

He said on sportklub.rs: “Unfortunately, the number of those infected is increasing.

“Jelena, I, my foundation, have decided to gather as much relevant information as possible this week to determine how best to donate our resources – knowledge, time, money – how it will affect the largest number of people across Serbia.”

The Diamond League has announced the postponement of its meetings scheduled for May due to the escalating crisis.

The meets in Stockholm, Naples and Rome, and Rabat have joined the opening events in Qatar and China, which were already cancelled.

The Diamond League said it remained hopeful of announcing a rearranged schedule for the 2020 season in due course.

It said in a statement: “The meeting organisers, the Wanda Diamond League and World Athletics remain committed to delivering a structured extensive season in 2020.

“The aim is to ensure that athletes can compete at the highest possible level this year, and that fans will be able to see their favourite stars in action, whenever the global health situation allows.”

Despite new statistics showing the US is the world’s worst affected nation from the virus, the NFL indicated its draft will go ahead as scheduled next month.

In a memo seen by nfl.com, commissioner Roger Goodell instructs teams to ensure their draft operations are conducted in a way that ensures the safety of staff during the pandemic.

Goodell wrote: “Everyone recognises that public health conditions are highly uncertain and there is no assurance that we can select a different date and be confident that conditions will be significantly more favourable than they are today.

“I also believe that the draft can serve a very positive purpose for our clubs, our fans, and the country at large, and many of you have agreed.”

Meanwhile non-league Jersey Bulls say they will seek clarification from the Football Association after the current season for clubs from levels three to six was declared void.

Jersey had already mathematically ensured promotion from Division One of the Combined Counties League after winning all 27 of their matches in the current campaign.

In a statement the club said: “The club was in the unusual position of having already secured promotion at the time the league was suspended and we will be engaging further with the FA and Combined Counties League on this issue.”

Bath have become the latest Gallagher Premiership club to announce pay cuts for players and staff.

Chief executive Tarquin McDonald said all players and staff have been asked to agree a 25 per cent reduction of salary due to the “unprecedented landscape” the sport faces.

Work is under way to convert part of the training ground of rugby union club Scarlets into a field hospital ward amid the outbreak.

Parc y Scarlets in Llanelli, Carmarthenshire, will provide additional bed space for hundreds of people on the turf of its indoor training pitch, described by the club as the Barn, with the aim of being ready for an anticipated peak in demand in May.

Golf’s Evian Championship, one of five majors in the women’s game, will move into the week vacated by the postponement of the Tokyo Olympics.