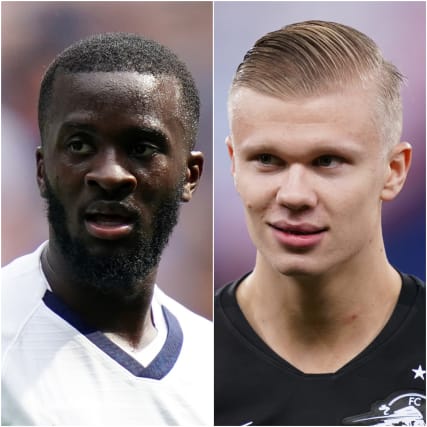 Barcelona could be tempted to make a move for Tottenham’s TanguyNdombele, reports the Daily Mirror. The 23-year-old moved to north London from Lyon for £58million last summer but has struggled with form at the Premier League side.

Real Madrid are eager to land the signature of Erling Braut Haaland over the summer, reports the Standard. The 19-year-old only signed for Borussia Dortmund last summer and is wanted by a number of top European clubs who have been tempted by his £50million release clause.

Ferran Torres, who has impressed during this time at Valencia, has caught the eye of Liverpool, reports the Daily Mirror. Real Madrid and Barcelona are also keen on the winger who has become a regular in the Spain under-21 side.

Tiemoue Bakayoko, who has failed to impress since arriving at Chelsea, is looking to head to AC Milan over the summer, reports the Sun. The 25-year-old has only made 29 appearances at Stamford Bridge and went to the Serie A side on loan in the 2018-19 season.

Loris Karius, who is on loan at Besiktas from Liverpool, is wanted by a number of clubs, reports Voetbal24. Karius, 26, has caught the eye of West Ham, Sporting Lisbon and Anderlecht who would have to shell out £4.5million.

Paul Pogba: Manchester United are looking to extend the contract of the 27-year-old despite uncertainty about the midfielder’s future at Old Trafford, reports AS.

Pedro: The Chelsea midfielder is set to leave the club when his contract expires in the summer, says Cadena Ser.