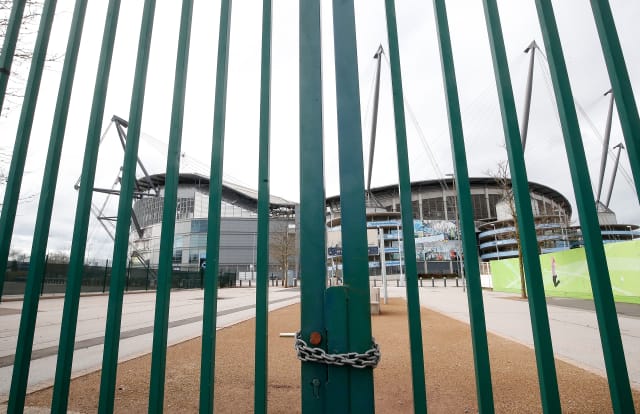 Football’s governing bodies admit “difficult decisions” will have to be taken to deal with the financial impact of the coronavirus pandemic.

The Premier League, EFL and Professional Footballers’ Association met on Friday to discuss the economic implications of the suspension of the season.

“The Premier League, EFL and PFA agreed that difficult decisions will have to be taken in order to mitigate the economic impact of the current suspension of professional football in England and agreed to work together to arrive at shared solutions,” said a joint statement.

The pinch is already being felt, with Birmingham asking some players to defer half their pay, while players at Leeds have volunteered for a wage deferral.

There will be further talks next week to formulate a joint plan.

Last week the projected restart of the season was put back until April 30, and that date has not changed.

A decision on whether this season’s British Grand Prix goes ahead could be taken as early as next week.

Formula One bosses are in the process of putting together a new schedule after the opening eight races were called off.

But their hand could be forced, with the All England Club holding an emergency summit on whether this year’s Wimbledon, which concludes a week before the British Grand Prix, will take place.

Silverstone managing director Stuart Pringle said: “It is not our decision alone.”

World Athletics is prepared to be flexible on the dates for the rescheduled Tokyo Olympics, but president Lord Coe has appeared to indicate a springtime Games would not be ideal from a track and field perspective.

Initial discussions took place on Thursday between the International Olympic Committee and international sports federations about the best slot for the Games, which will now take place no later than the summer of 2021.

Coe said the spirit of Thursday’s meeting as it was relayed to him was one of co-operation and flexibility, but he did accept that peaking in April and May was difficult for an athlete.

“I wouldn’t disagree with that,” he said, when it was put to him that athletes rarely find their best form at that time of year.

Athletics’ Diamond League has announced the postponement of its meetings scheduled for May. The meets in Stockholm, Naples and Rome, and Rabat have joined the opening events in Qatar and China, which were already cancelled.

The Diamond League said it remained hopeful of announcing a rearranged schedule for the 2020 season in due course.

England manager Gareth Southgate joined other leading sports figures in urging people to “stay at home, protect the NHS and save lives”.

“Life is very different for us all at the moment and sport rightfully stands aside to support a more important cause during these unprecedented times,” the Three Lions boss said on Friday, when his side had been due to face Italy in a friendly.

“We were supposed to be welcoming Italy and Denmark to Wembley Stadium in the coming days, but football is insignificant as we are all in the midst of a global battle.

“Now is the time for sport to come together, speak with one voice and be united behind a very clear message: stay at home, protect the NHS and save lives.”

Novak Djokovic and his wife Jelena announced they would donate one million euros to buy ventilators and other medical equipment to fight the virus in Serbia.

Despite new statistics showing the US is the world’s worst affected nation from the virus, the NFL indicated its draft would go ahead as scheduled next month.

In a memo seen by nfl.com, commissioner Roger Goodell wrote: “Everyone recognises that public health conditions are highly uncertain and there is no assurance that we can select a different date and be confident that conditions will be significantly more favourable than they are today.

“I also believe that the draft can serve a very positive purpose for our clubs, our fans, and the country at large, and many of you have agreed.”

Golf’s Evian Championship, one of five majors in the women’s game, will move from July 23-26 to August 6-9, the week vacated by the postponement of the Olympics, tournament officials announced.