World Cup organisers to give 20,021 tickets to health and social care workers 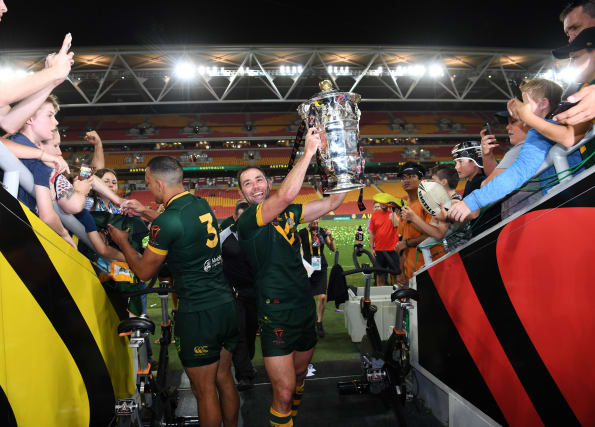 The organisers of the 2021 Rugby League World Cup are to give 20,021 tickets to health and social care workers to recognise their efforts in fighting the coronvavirus pandemic.

Chief executive Jon Dutton made the announcement at an online press conference called to provide an update on preparations for the tournament which took place at the same time as the nationwide applause for the NHS staff.

“The team has made the unanimous decision to provide 20,021 free tickets to key workers in the UK as our way of saying thank you,” Dutton said.

“The work, effort, dedication and sheer determination needs to be recognised and hopefully we can provide these local heroes and their families with something to look forward to next year.”

Dutton also says his organisation is pointing volunteers who have signed up for the tournament – 25 per cent of them are new to volunteering – towards helping in their communities during coronavirus outbreak but remains hopeful the World Cup will be unaffected by it.

“Other sports, clubs, leagues and events have been acutely impacted by COVID-19 and our planning needs to be aligned and proportionate with the global crisis and respectful of more immediate needs,” he said.

“We have done various aspects of scenario planning and we believe the current plan is the most suitable at this point.

“However we know we are required to be flexible and adapt as and when appropriate.”

Organisers have been forced to draw up a new timeline for the rest of 2020 but Dutton said cancelling the tournament or pushing it to 2022 had not been discussed and it is business as usual.

The World Cup is being held in October and November of 2021 and Dutton says his team will keep a watching brief on what impact possibly delayed kick-offs to the 2021 domestic seasons in NRL and Super League may have.

Dutton says the football calendar could dictate which venues are available and concedes that the cancellation of this autumn’s Ashes Series would be “a real blow” as it is seen as a key marketing tool ahead of the tournament.

Branding for the tournament and the team bases for the 21 nations involved in the men’s, women’s and wheelchair World Cups will be revealed on June 10 which will mark 500 days to the opening fixture at St James’ Park, Newcastle, where England will play Samoa.

Between June 10 and September, the organisers will outline the schedules and announce ticket prices and on October 23 – exactly one year out –  a public ballot will open and run to November 27.

Tickets will then go on general sale in early 2021.