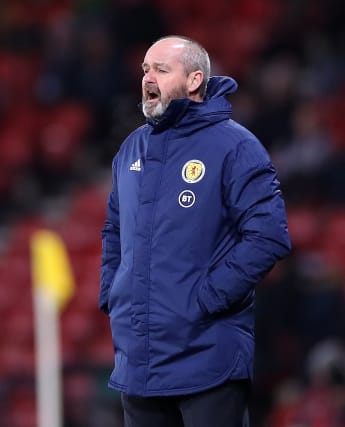 Scotland boss Steve Clarke has urged the Tartan Army to put Euro 2020 hopes on the backburner in order to help the country battle the coronavirus crisis.

The pandemic has paralysed football both at home and abroad and Clarke was speaking on the day Scotland should have played Israel in their play-off semi-final at what would have been a packed Hampden Park.

The victors will take on the winners of the Serbia versus Norway tie away in the play-off final but Clarke, in a lengthy message to all Scotland supporters, called for the more important issues of public health to be dealt with first and foremost.

He said: “I think most of you, like me, will have woken up this morning, looked at the date and wished the circumstances could have been very different.

“Thursday, March 26th had been circled in my wall planner from the moment I had the honour of becoming Scotland head coach.

“Truth be told, I had hoped we wouldn’t have needed the Nations League play-off route: I believed we could have finished higher than our eventual third place in the UEFA EURO 2020 qualification group.

“All those qualifying games seem far less important now, insignificant even, but this is the reality of the situation we find ourselves in.

“The world has changed in recent weeks and months and football, rightly, has had to take a step back as our government and our wonderful, brave and selfless NHS staff step up their efforts to tackle a far greater opponent.

“This is a difficult letter to write because, as a father and grandfather there are far greater considerations in life right now and far greater responsibilities on all of us but, at the same time, I feel it important to recognise and show appreciation for the effort you all had gone to in ensuring our match against Israel would have been a sell-out.

“It would have been an incredibly proud night for me and the whole team and we would have given every ounce to be on that plane to Norway or Serbia.

“I know thousands of you had also booked onward travel, ever the optimists. By all accounts Budapest or Berlin would have been the unwitting hosts of Scotland fans awaiting connections to either Oslo or Belgrade.

“That sense of togetherness, loyalty and commitment is needed in our lives now, more than ever before.

“The First Minister and the chief medical officer have been clear in outlining exactly what the nation must do to combat the virus that has become a global pandemic.

“I urge all of you to heed that advice: stay indoors, protect your family, and protect others. Stay home, save lives. Simple.

“Football is our national sport and its absence has had the same effect on me that it has had for every lover of the game in this country.

“The sooner we all take the advice on board to stay at home, the sooner we can get back to our own normality of midweek nights and weekend afternoons among friends, at our spiritual homes across the country.

“That is for later, as is our match against Israel, whenever the authorities consider it appropriate – and above all, safe – to resume football across the world.

“In the meantime, I will be thinking of you tonight and imagining what might have been and what could yet be. Stay healthy, stay safe, most importantly stay home.”

It read: “Dear friends from the @ScottishFA, we were supposed to fight tonight for a ticket to Euro 2020, now we are fighting united against Coronavirus. Together, we will win.”