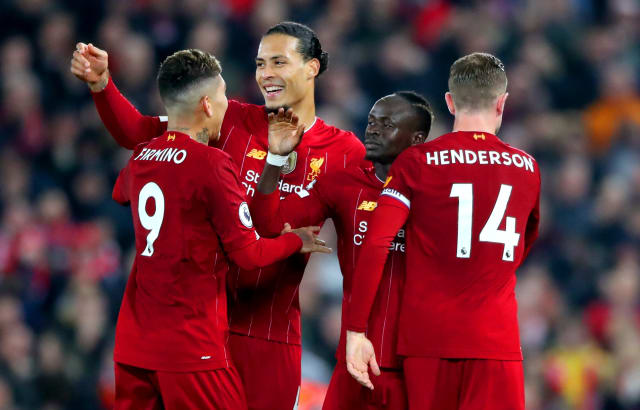 Liverpool were expected to dominate the shortlist for the PFA Players’ Player of the Year before Premier League action was halted by the coronavirus crisis.

Jurgen Klopp’s runaway leaders established a 25-point lead over defending champions Manchester City as they closed in on a first top-flight title in 30 years.

Here, football reporters for the PA news agency pick their 2019-20 player of the year based on the season so far.

There is no doubt that a Liverpool player deserves to win this award. They have all brought out the best in one another and Mane just pips it for me. A likeable, team player with a cutting edge, he has come in clutch on a number of occasions.

Henderson has had to listen to fans and pundits questioning whether he is good enough for Liverpool for much of his nine years at Anfield. He is not just good enough but has made himself instrumental in the middle of the park with his all-round talents and leadership qualities.

Powerful, hard-working and unselfish, Mane is a vital cog in Klopp’s slick system and has repeatedly underlined his value to the Reds by chipping in with crucial contributions. The influential 27-year-old deserves individual recognition and would be a worthy winner.

It is remarkable to think people were questioning the Champions League-winning captain’s place in the side earlier in the season. The influential midfielder has proved the doubters wrong as the driving force for Liverpool’s formidable title charge. Outstanding on the field and as a leader in the dressing room.

Alexander-Arnold’s consistency belies his age. The 21-year-old has already provided 12 Premier League assists this season and fully deserved his Ballon d’Or nomination. The England international is a joy to watch and the leader in a new breed of full-backs.

The Senegal international edges it over team-mates Henderson and Virgil Van Dijk for the influence his goals have had on games and the threat he carried particularly early in the season. Of the 18 he has scored this season, eight have been the important first in the game. More than a quarter of his goals have been winners.

Given the collective brilliance of Liverpool it is hard to single out individuals but Van Dijk continues to excel. The Reds are on course to concede a handful more goals this season than last but given the injuries suffered by Alisson Becker that is no surprise, and Van Dijk has once again anchored the back four while starting play from the back and popping up with vital goals.

The bare stats of 12 league assists and 10 clean sheets from 29 appearances are impressive enough, but Alexander Arnold’s right-flank threat remains central to Liverpool’s attacking shape. He offers the blueprint for attacking as a winger from full-back.

Mane has been an integral part of Liverpool’s success this season and most impressive is the number of times he has scored the first or last goal for the Reds. Eighteen goals overall and 14 in the Premier League, which have been worth 18 points. A key cog in Klopp’s machine.

Henderson’s pivotal role in leading Liverpool to the cusp of the title should get the recognition it deserves. The previously unsung midfielder’s boundless energy, calmness in possession and accurate, unfussy passing are crucial to the way Klopp’s side play, and his presence in the Anfield dressing room cannot be underestimated.

Where Liverpool’s ultimately unsuccessful bid for Premier League glory last season was founded on thrilling attacking play, they have perhaps not been as fluent this time around and have had to rely more upon defensive solidity. Van Dijk’s individual contribution has been immense and his leadership skills invaluable.

The Liverpool captain has shown his leadership and worth in the centre of Klopp’s midfield this season. After he sustained a hamstring injury during the Reds’ Champions League defeat at Atletico Madrid, the club struggled in his absence, losing two out of their subsequent four matches.

Henderson has been the driving force behind Liverpool’s resurgence under Klopp. In such a season of dominance, the 29-year-old has again proven the heartbeat of the side and a supply line to a potent front three. His unselfish team-ethic and incredible work-rate would make him a worthy winner.

While in previous seasons Mohamed Salah has been the standout performer of Liverpool’s front three, this year it has been Mane’s turn to be the star. He has dominated defences with his pace and power and banged in the goals. He has been the Reds’ go-to man and deserves the accolades.

Alexander-Arnold has been key for Liverpool. The right-back is one of their most effective attacking outlets and while his top-flight assists speak for themselves, his pin-point rapier crosses have seen him emerge as one of the world’s best defenders.