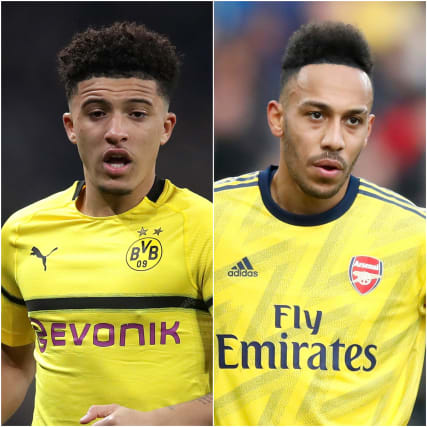 Manchester United are in prime position to land the signature of JadonSancho over the summer, the Independent reports. Sancho, 20, is currently on the books of Borussia Dortmund and is subject to interest from a number of top European clubs but the Old Trafford side are leading the race, the paper says.

Real Madrid are still keen on bringing in Arsenal’s Pierre-EmerickAubameyang, the Daily Star says. The LaLiga side are hopeful a player-plus-cash deal will be enough to see the Gabon striker leave the Emirates.

Meanwhile, Arsenal are looking to sign Chris Smalling from Manchester United, with the Red Devils looking for £25m reports the Metro.

Sticking with north London and Jan Vertonghen is unsure about whether to extend his stay at Tottenham and is reluctant to sign a new contract, according to the Daily Mirror.

Dani Ceballos could stay at Arsenal beyond the expected expiration of his loan deal on June 30, the London Evening Standard reports. Mikel Arteta’s side are confident they will be able to keep the 23-year-old longer should the football season run into July.

Dayot Upamecano: Arsenal are close to signing the RB Leipzig defender, who is said to be keen on a move, reports Bild.

Timothy Castagne: The Belgium defender who is currently on the books of Atalanta is wanted by Leicester, according to Sport Foot.

Filip Krovinovic: West Brom are confident they will be able to sign the Croatian midfielder on a permanent deal after his loan from Benfica expires, says the Express and Star.