Premier League darts could be postponed until July 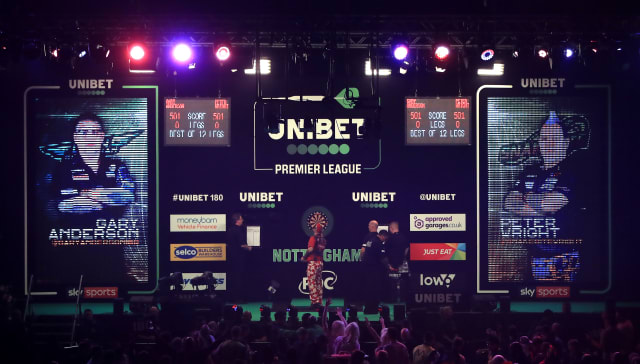 Premier League darts may not resume until July as the PDC faces up to the prospect of a three-month shutdown because of the coronavirus pandemic.

Dates in Berlin, Manchester and Birmingham next month have already been rescheduled, and PDC chief executive Matt Porter has admitted May’s programme, which is due to take place in Glasgow, Leeds, and London, is likely to follow suit.

Porter told Sky Sports’ The Darts Show podcast: “We announced on Tuesday that all the Premier League nights in April are postponed – it’s more than likely the May ones will be too, but we are working through the challenges associated with those.

“I think it’s fair to say you can write off most of the next three months… (it’s) a difficult position to get anything up and running again.

With Judgement Night in Rotterdam having already been postponed, organisers are working on the basis that the competition will take place from July 2 onward, with the trip to Newcastle on October 1 currently the last in the revised schedule.

Porter said: “At the moment, we don’t want to look too long-term. It’s an ever-changing situation and we don’t know what it will be like in six weeks, six months, or however long it may be.

“Things are looking very different and we can’t afford to be too precious about which nights or which cities we get in before Judgement Night, or when there might be a break or where the Finals will be.

World Cup and World Series events are also due to take place in May and June, while the European Tour has already been affected by measures designed to limit the spread of Covid-19.