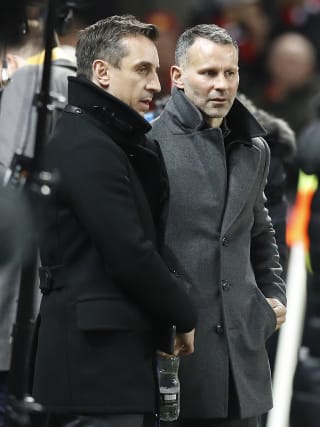 Gary Neville has stressed he misses football but there are currently greater priorities after he and Ryan Giggs gave health workers free access to their hotels.

Neville and Giggs’ Stock Exchange and Hotel Football in Manchester were closed to the public from Friday with access to the 176 beds given to medical staff as a show of solidarity during the coronavirus pandemic.

The former Manchester United duo have revealed around 35 NHS staff have checked in so far and that the expectation is the properties will soon be full of health workers, who are being offered a stay of around 10 days.

Amid a global sporting shutdown, the English football season has been halted until at least April 30.

“No one will ever complain about football being on again because I think everyone wants it to return, as they do with normal life. But, in this moment in time, there are greater priorities.”

Giggs said with regard to the hotels: “At the moment we have about 20 NHS staff at Hotel Football, 15 at our other hotel, Stock Exchange. But we expect both of them to be full in the next week or 10 days.

“We are offering NHS staff to stay for around 10 days and then they have their turnovers. Free of charge. It is difficult at the moment to gauge how to keep our staff safe and the NHS staff safe as well. We are doing our best.”

Neville said the pair started planning what they would do with the hotels with regard to the outbreak around three weeks ago.

“One of our shareholders Peter Lim is Singaporean and him and his team were feeding in to us how they have dealt with things quickly and decisively over in Singapore and how they are beating this virus,” Neville said.

“Three weeks ago in England I don’t think we were quite seeing the dangers, but we have got good intelligence. We spoke to Ryan’s mum, who worked in the NHS for many years, speaking to many nurses and doing our own business planning and keeping our guests and staff safe.

“It was a week or so ago that we decided we would open our hotels to medical professionals and NHS staff as they would need it.”

Giggs said the hotel staff were coming in on a voluntary basis, while emphasising that “with the virus, you have to be careful”.

The Wales manager added: “We have had the help of the government over the last few days, which has helped the hospitality business, but it is going to be a long fight.

“We will just have to see where we are in a few months. The landscape is changing so quickly, but hopefully we can get rid of this virus sooner rather than later.”