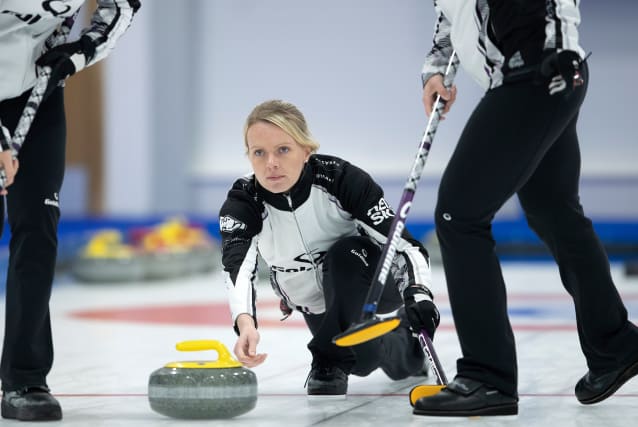 Two-time Scottish curling champion Vicky Wright has put her full-time sporting career on hold to return to the NHS frontline.

Wright stepped back from her role as a general surgical ward nurse in July last year to focus fully on preparing for the Winter Olympics, which are due to be held in Beijing in February 2022.

But the 26-year-old was back working in Forth Valley Larbert Hospital last week after the World Championships in Canada were cancelled.

The health worker was part of an Eve Muirhead-skippered Scottish team that was among the favourites to win a world title in Prince George this month but the coronavirus outbreak forced the cancellation on the eve of the event kicking off.

Wright quickly made herself available to the NHS on her return to Scotland as the health service gears up for its most challenging period.

Wright said: “It was a weird situation and a bit of an emotional rollercoaster and we were absolutely gutted, but we could see how everything was quickly changing and we knew there were other much bigger priorities than sporting events which are now on the back burner.

“They have to take second place to what is happening just now and when I went into work last week at the hospital it really sank in. There was no world champs and the bigger picture was that helping out at home was more important just now.”

Wright, who maintained a part-time nursing role when her curling commitments allowed, added: “In my nursing career over the years I always felt it was a privilege to be with someone and look after them when they were unwell and vulnerable and it has always made me appreciate the life I have, being able to work as a nurse which is a job that I love and also compete in curling which is a sport that I love.

“I have always been very lucky that both my work and the British Curling programme both appreciated how important both facets were to me.

“Once I was home I contacted my supervisor and said I was back and could be available to do whatever I could to help. For now I am picking up an extra two to four shifts per week for the foreseeable.

“There is an amazing team spirit on my ward and as public transport is not an option now we are all helping each other out with lifts and childcare, so there is a really great team spirit and positive approach from everyone and we are taking this all in our stride and we will all pull together.

“We are fully informed and prepared so we are ready and it is nice to know that my curling team-mates are so proud of me and want to help me as well in any way they can.

“They know it is my time to go back to work, but they also know I am still training as an athlete, like them.”