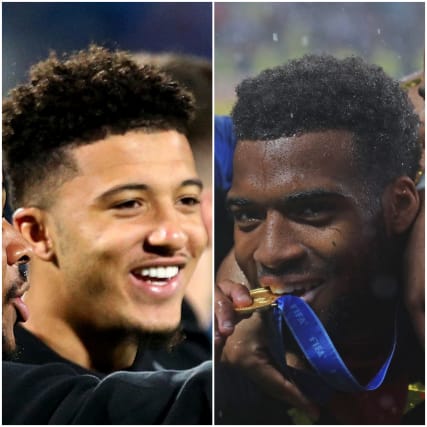 Manchester United manager Ole Gunnar Solskjaer is “eager” to bring Borussia Dortmund’s Jadon Sancho back to England, the Evening Standard reports. But the England winger is also wanted by Chelsea, with former Blues captain John Terry quoted in the paper as saying the 19-year-old would be a “great addition” at Stamford Bridge. Sancho previously played in the north-west as part of United rival Manchester City’s youth team.

Staying at Old Trafford and United have held talks with Atletico Madrid’s Thomas Lemar, according to the Manchester Evening News which cites ESPN. The France midfielder has played just 88 minutes of football since December under Atletico boss Diego Simeone, who has said the 24-year-old has “not met the expectations set for him”. But the Red Devils will have to compete with Arsenal, Chelsea, Tottenham and Liverpool.

Italian giants Inter Milan could scupper United’s plans to sign Pierre-Emerick Aubameyang from Arsenal. Metro cites Italy’s La Gazzetta dello Sport as saying the Serie A side want to sign the 30-year-old striker as a replacement for Argentina international Lautaro Martinez, 22, who is being courted by Barcelona and Chelsea. Barcelona are also said to be interested in Aubameyang.

Aubameyang should be replaced at Arsenal by Burnley striker Chris Wood, according to the Daily Star. The paper reports Wood could offer the Gunners some needed threat in the air.

Kylian Mbappe: Paris Saint-Germain will use the suspension of football due to the pandemic to convince the 21-year-old France attacker to extend his deal beyond 2022, Marca reports.