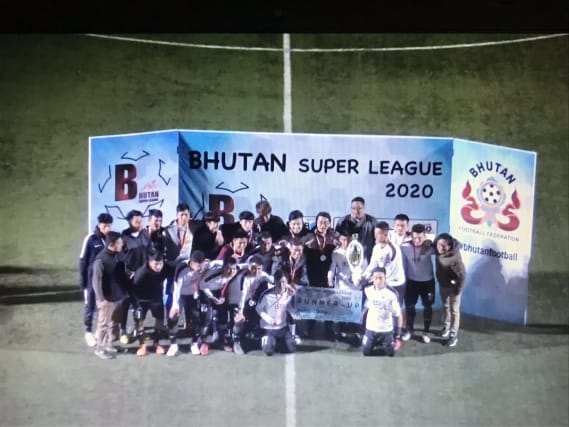 Against a backdrop of an expectorating cameraman, a relentless chorus of barking dogs and at one point what sounded like an especially rigorous domestic argument, High Quality United defied the pandemic to win the Bhutan Super League on Saturday.

A sport-starved audience that briefly peaked at around five thousand tuned in to an online feed to watch the conclusion of the domestic season in a nation ranked 189th out of 210 in the latest FIFA world rankings.

Seldom living up to their name, the favourites recovered from a 1-0 second-half deficit to score twice in as many minutes and claim the title, although the full-time whistle was notable for the almost complete lack of celebrations that followed.

Bhutan reported its first case of the coronavirus on March 6, and subsequently closed its borders to tourists. It is one of only a handful of countries – along with the likes of Belarus and Burundi – to proceed with competitive matches this weekend.

It is not the first time Bhutanese football has inadvertently found itself at centre-stage. It made headlines in 2000, when the national team lost 20-0 to Kuwait in the Asian Cup qualifiers, hampered by conceding four penalties for what a BBC report described as “rugby tackle-style challenges”.

In 2002, a game organised by a PR firm to coincide with the World Cup final and featured the then two lowest teams in the FIFA rankings saw Bhutan sweep to a 4-0 victory over Montserrat.

Subsequently, the self-styled ‘Dragon Boys’ have continued to cautiously improve, winning their first World Cup qualifying match against Sri Lanka over two legs in 2015, and making a good start to the 2022 campaign.

Despite pinball pitch conditions, sporadic flashes of skill were evident at the Changlimithang Stadium on Saturday, not least in the 35-yard free-kick by Lhendup Dorji that dragged High Quality United level after 68 minutes.

High Quality United had started the game as strong favourites having won the regular season. Paro, better known for an international airport so dangerous that only eight pilots possess licenses to land on it, had scraped through via a midweek play-off.

In front of a small but occasionally vociferous crowd prone to dissolve into fits of laughter when chances went begging, and buffeted by the barks of a seemingly large proportion of the estimated 7,000 stray dogs that lurk in the capital, the favourites dominated the opening stages.

They twice slapped the woodwork and forced a pair of fine double-saves out of the Paro keeper before they were made to pay for their missed chances when Gyeltsen Zangpo fired home in the 64th minute.

Dorji’s equaliser was followed almost immediately by a winner from Tenzin Thinley, after a period of stupefyingly bad defending which drew scorn from the crowd and a worrying retch of displeasure from the cameraman.

The overriding reaction to the final whistle and subsequent trophy presentation was one of broad disinterest, all of which suggests the Bhutanese populace may find it easier than most to cope with the football shutdown which is sure to stretch on into the months ahead.