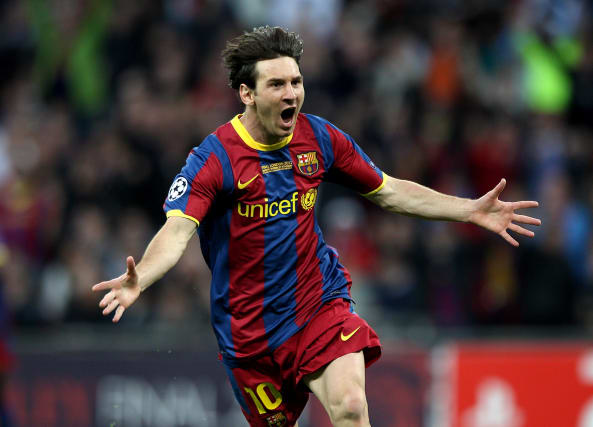 The Argentina star reached the milestone, aged just 24, with a hat-trick in a 5-3 win over Granada at the Nou Camp.

Messi, who had already set up Xavi’s opener, equalled the record of 232 goals scored by Cesar Rodriguez in the 17th minute.

He met a deflected cross with a crisp first-time shot with his left foot which fizzed in off the far post.

He broke the record in the 68th minute, killing Dani Alves’ ball over the top with his first touch before lobbing advancing Granada keeper Julio Cesar with his second.

Messi’s third – and goal number 234 – came from another Alves pass four minutes from time, the forward rounding Cesar and finishing into an empty net.

Messi’s third goal had taken his tally to 54 in all competitions that season.

He was then top-scorer in LaLiga with 34 goals from 27 games, moving two ahead of Real Madrid’s Cristiano Ronaldo.

Messi finished the season with 50 league goals, 72 in all competitions, and went on to score a record-breaking 91 goals for Barca and Argentina combined in the calendar year.

Messi’s goalscoring exploits continue to amaze. Now 32, he has now scored 438 LaLiga goals in 474 appearances. His last goal came from the penalty spot in a 1-0 win over Real Sociedad, taking his league tally for this season to 19, with 24 in all competitions.

The stats say he has scored 697 goals and provided 306 assists for club and country. Messi has also hit 54 career hat-tricks.