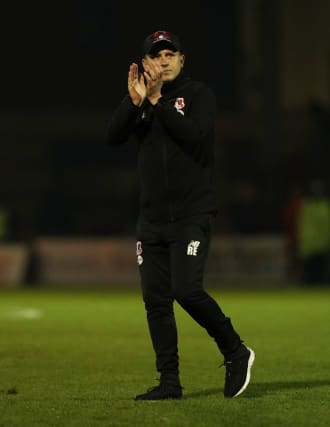 Leyton Orient manager Ross Embleton has praised the club’s media staff for coming up with the idea of staging a fundraising 128-team FIFA 20 tournament.

Money will be raised for Football League clubs whose finances will be hit by suspension of the leagues due to the coronavirus pandemic.

The O’s media team of Luke Lambourne and Dan Walker came up with the concept, which was initially for only 64 clubs before the #UltimateQuaranteam tournament went viral.

Goalkeeper Sam Sargeant will be Orient’s player, with the virtual action set to get underway on Sunday and excitement is building.

“The Quarantine Cup has gone through the roof and it’s important to acknowledge our two media boys, Dan and Luke, have only been working together for two weeks, so to come up with this idea is genius,” Embleton told Sky Sports News.

“I know it has created a huge amount of interest and so far the Quarantine Cup has pulled together an extra 23,000 followers or something along those lines.

“The idea escalated as a small tournament and now there are 128 teams and there is a possibility of streaming it.

“I know my little boy is excited to watch our goalkeeper Sam Sargeant perform for us. I think it is a fantastic idea and keeps everyone’s football interest going in some way.”

With the English football season suspended until at least April 30, Orient’s players have been asked to train on their own for the foreseeable future.

Embleton added: “Ultimately there is an element of trust, but we’ve all downloaded the same app on our phones.

“Part of the process of the session they are given by the fitness coach every day is for them to update our WhatsApp group with the work out they’ve done.

“That calculates the distance they’ve run, the time they’ve worked for and that sort of thing.”