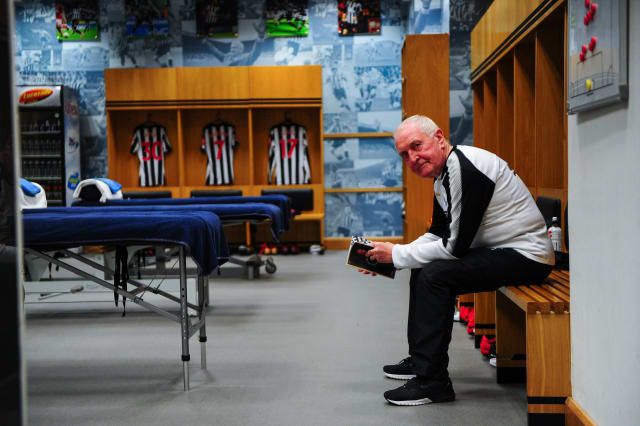 George Ramshaw has a spring in his step once again, thanks to the generosity of Newcastle's players.

The Magpies' assistant kit manager, who played amateur football for the hugely successful Whitley Bay side of the 1950s and 1960s and also represented Great Britain, faced months in pain as he waited for hip replacement surgery.

However, once the players learned of the popular pensioner's situation, they clubbed together to raise the money to send him to a private hospital.

Head coach Steve Bruce said: "It was a lovely touch. Footballers get much maligned these days, but they organised a whip-round between them and raised something like £15,000 and sent him off to a private hospital to get it done.

"He's only just come back to work in the past couple of weeks, and he's all fixed and healed. It seems to have been a big success. He's fine.

"I think it might have been Andy Carroll's initial idea – Andy, of course, has known George a long time.

"George is as good as gold now, jumping around the place with a brand new hip. He'll be playing soon! We're all thrilled to see him like that because he is a lovely, lovely man."

Former Gateshead assistant manager Ramshaw, whose age remains a closely-guarded secret, underwent surgery within a fortnight and was back doing the job he took up in 1995 before the coronavirus pandemic forced the closure of the club's training base.

He said: "I'm eternally grateful to the players. I was in a lot of pain with my hip and it would have been months before I could get an operation through the NHS given how busy they are.

"The players said to the doctor, Paul Catterson, 'Can we do something?' And the doctor put it in motion with the Nuffield (Hospital).

"Within a fortnight, I was in and had it done. All the lads came together and put in. Me and my wife are both very grateful.

"I'm feeling great now. I was off for about four months, but I'm back full-time now. It's champion."