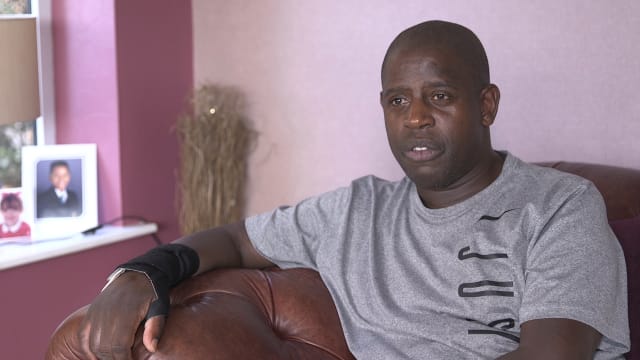 Lenny Johnrose could be forgiven for being more preoccupied than most by the coronavirus pandemic, but his biggest concern is about his wife and children cramping his style at home.

The 50-year-old former Burnley, Bury and Swansea player was diagnosed with motor neurone disease three years ago, a condition which could make contracting Covid-19 “particularly dangerous” according to information on the MND Association website.

A 45-year-old MND sufferer from Kettering in Northamptonshire became the youngest UK victim of the coronavirus when he died earlier this week.

Johnrose says he is “not concerned at all” by the virus, and says people around him are more worried than he is. But he joked that being cooped up with his wife Nadine and their children Elizabeth and Patrick was a “nightmare” he could do without.

“I’ve just been watching some daytime TV because there’s no sport on,” he told the PA news agency.

“I was watching This Morning with that married couple (Eamonn Holmes and Ruth Langsford)… how they work together and live together I do not know.

“I’m going to have to lock myself up or book myself into a home, I cannot spend 24-7 with this lot, no way.

“Elizabeth is 16 so she’s off college. Patrick is 14 – he’ll take over the living room to play FIFA or Fortnite. Nadine, my wife, will be around to tell me what to do. So the sooner I get booked into a home the better,” he said.

Johnrose said he had been due to go on a night out last week before Nadine warned him off.

“My wife put her foot down. She said ‘absolutely no way are you going out’, and I always do as I’m told,” he said.

Johnrose has spoken in the past of how he “couldn’t be more proud” of his family, and said his children have shown “ridiculous” levels of strength in the face of his diagnosis.

Closures of some football training grounds and restrictions on others have forced Johnrose to put his ‘Project 92’ MND awareness campaign on hold, but he will still be able to work from home on planning for a charity ball on September 26.

He will also be recording some podcasts, after plans for a documentary had to be shelved because the crew can no longer visit him.

The first draft of a book about his life is in the editing process, and he hopes it will be published in the summer.