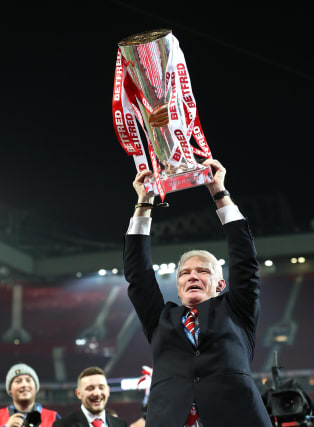 St Helens chairman Eamonn McManus says the Super League season could be extended to the end of November because of the coronavirus pandemic.

The Rugby Football League has ordered a shutdown up to April 3 but McManus expects the suspension to be renewed and admits the season-ending Grand Final is unlikely to played on the scheduled date of October 10.

“We are talking about a three-week close-down but that’s really just to work out the rescheduling,” said McManus in an interview posted on the Saints website.

“Common sense and practicality dictates that it’s going to be a longer close-down than that and that the season will look different.

“It may be deferred, it may go into later October or towards November or the end of November.

“But what we want to do is obviously fulfil as many fixtures as we can, and for Super League, the Grand Final and the Challenge Cup to take place.”

An extension to the season could see the scrapping of the Ashes Series, which is due to get under way on October 31.

St Helens, the reigning Super League champions, own their own stadium and, according to McManus, are in a strong enough financial position to withstand the difficulties faced by other clubs.

Hull KR owner Neil Hudgell has claimed most clubs will be faced with a £1million “hole” by the end of the year and has called for Government support, a move that was taken up in Parliament on Thursday by Hull East MP Karl Turner.

McManus added: “Other clubs are in less of a strong position and the game as a whole has to look at how it gets through the weeks and months ahead.

“I’m glad to say the RFL got on top of this quickly in terms of seeing the size of the problem and the open-ended nature of it. It has been in discussions with Government for the last two weeks.

“The problem is recognised by Government, that we are not just a business but part of the fabric of society and very important to the community, particularly in the North of England.

“Everybody and every business is knocking on the door of Government at the moment so we’ve got to be sensible about the challenge they face but I’d like to assure fans that both as a club and a sport we are on top of the problem.”

Meanwhile, two Australian players with Championship club Featherstone are returning home to be with their families during the pandemic.

Conor Carey and Alec Susino will fly out with the blessing of the club and will continue to train in readiness to return as soon as the season prepares to re-start.

Rovers chief executive Davide Longo said: “We 100 per cent understand the lads’ desires to travel back home and be with their families in the current circumstances.

“Their loved ones are a long way from Featherstone and I can only imagine what that must be like, especially when there isn’t any sport on at the moment.

“They both travel with our best wishes and we’re looking forward to seeing their faces back here soon.”