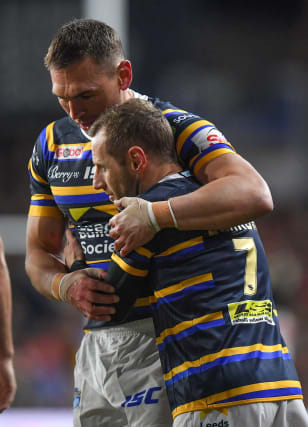 Leeds director of rugby Kevin Sinfield will run a solo marathon in the Pennines in aid of former team-mate Rob Burrow, who was diagnosed with motor neurone disease in December.

Sinfield was due to run the Manchester Marathon on April 5, which has been postponed due to the coronavirus outbreak, to help raise awareness and funds for the disease.

A statement on the Rugby Football League website read: “Instead of large crowds, 25,000 fellow runners and a course that is the flattest major marathon in the United Kingdom, he will now set off on his own on the 26.2-mile special route he has designed around his home village of Saddleworth, with all the hills and challenges the Pennines can throw at him.

“He has been training but admits his preparations are not fully complete so he will need to dig deep.”

Burrow, 37, won eight Grand Finals, three World Club Challenges and two Challenge Cups in 17 years with Leeds and played alongside former team-mate and skipper Sinfield for the majority of them.

Leeds said on their official website: “While we appreciate times are tough for everyone at present, if you felt like you wanted to support Kevin, we have set up (a uk.virginmoneygiving.com) page so you can donate to support the Motor Neurone Disease Association, who are helping Rob and all those impacted by MND in England and Wales, and the Leeds Rugby Foundation who help transform lives through sport.”