James Anderson admits he is anxious over uncertainty caused by coronavirus 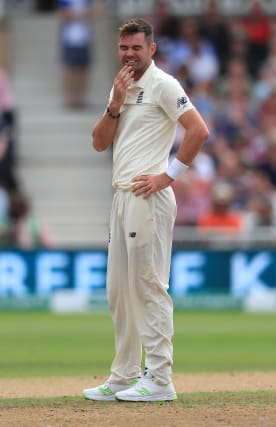 James Anderson admitted he is unsettled by the global coronavirus pandemic which the England seamer fears could lead to the domestic and international summer being scrapped altogether.

The County Championship is supposed to get under way on April 12 but government advice that mass gatherings should be avoided in the UK has essentially put the sporting calendar on hold for the time being.

A potential rescheduling of the season will be talked about between the England and Wales Cricket Board and the 18 first-class counties on Thursday, a situation which seems inevitable because of the uncertainty in the country.

But the ECB, which announced on Wednesday a suspension of all recreational cricket, says it will explore all options, including playing matches behind closed doors, plus possibly postponing or cancelling some of the season.

England, who last week postponed their tour of Sri Lanka, are slated to play the West Indies in a three-Test series, starting on June 4, but Anderson revealed his concern at the 2020 season failing to get off the ground.

“Cricket and sport is not the be all and end all but it is my livelihood, it’s all I know,” Anderson, speaking on the BBC’s Tailenders podcast, said.

“The season is unlikely to start. It’s still a little bit hazy as to what’s going to happen. There’s a chance we might not even bowl a ball this summer.

“I feel a little bit anxious. Just the not knowing is giving me a bit of anxiety.”

Anderson made the last of his 151 Test appearances against South Africa at Cape Town before a broken rib led to him missing the last two matches of the series.

The 37-year-old Lancashire bowler was overlooked for the Sri Lanka trip in order to continue his recovery with a view to being fully fit for the start of the English summer.

As well as the precarious landscape affecting his professional life, Anderson added: “Also trying to keep a young family healthy. I am trying to stay calm, follow the guidelines.

“My wife’s mum and dad live in Spain so they are in lockdown. They are in the age group where there are concerns. The anxiety is building up in our house because of not knowing what will happen in the next few months.”

Meanwhile, Ben Stokes has revealed the abdominal issue which led to him being withdrawn from England’s tour match in Sri Lanka was caused by a blow to the midsection during batting practice.

The decision to call off the tour of Sri Lanka was taken when England were still in the field at Colombo’s P Sara Oval during a warm-up.

Against a President’s XI, England were without Stokes, who had been pulled out of the fixture with a complaint the management were eager to stress was in no way related to Covid-19.

Stokes himself needed reminding that the injury almost certainly first originated when he was struck in the chest while getting some throw-downs.

“One thing the break has allowed me to do is get over my stomach injury that caused me to miss the second warm-up match in Colombo,” Stokes wrote in his Daily Mirror column.

“I’d had a bat, then sat down in a chair and had some lunch. When I got up to move it felt like someone was stabbing me in my abdomen, it was so painful. The doctor thought it might be appendicitis but a scan ruled that out, and we still didn’t know why I was in such pain.

“The next day when I got to the ground, Carl Hopkinson, our fielding coach, saw me and asked ‘do you reckon it was where I hit you?’ And then it suddenly dawned on me.

“He had hit me quite hard giving me throw-downs when I was batting and I had just completely forgotten about it. I’m all good now and will be ready to play again whenever the time comes.”