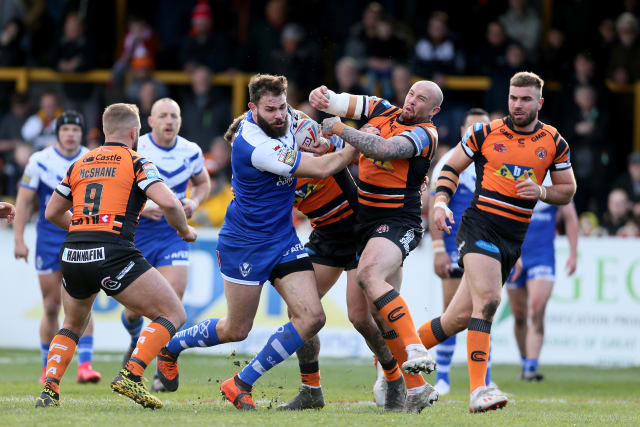 Rugby league players may agree to defer part of their wages in an effort to prevent clubs from suffering financial ruin during the enforced shutdown, says trade union organiser Garreth Carvell.

The Rugby Football League has suspended all matches, from Super League down to the community game, until April 3 at the earliest due to the coronavirus pandemic.

With no income for at least a fortnight and probably much longer, clubs will soon start feeling the pinch and Carvell – a full-time officer with the Rugby League Players Association, which is a part of the GMB – believes the players are ready to play their part in the game’s salvation.

“From a union perspective, we want to look after our members but, from a long-term, wider point of view of the game, there’s no point in making sure that everyone gets paid to the detriment of three or four clubs,” the former Warrington, Hull and England prop forward told the PA news agency.

“We need to make sure that the players are getting a fair crack of the whip and, if that means having maybe deferred payments or something of that nature, it might be something that can be negotiated.

“I plan to speak to the Championship and League 1 CEOs as soon as possible. It’s a case of trying to keep the game alive while this is going on.

“We don’t know how long it’s going to last – that’s the other issue. It’s got the potential to have a massive effect on clubs and the game. These are scary times.”

Carvell, who is also trying to set up an emergency meeting with the All Party Parliamentary Rugby League Group of MPs in a bid to lobby the Government for help, is confident redundancies can be avoided because “that would be a failure of my part”.

Carvell has over 600 members, more than half the pool of players spread across the three divisions of the professional game, with most of them part-time below Super League.

“In some respects many of them are lucky in that they’ve got jobs to fall back on but there are a few I know that do rely fully on their wages, and they’re not massive wages,” Carvell said.

“Some players simply couldn’t afford to take any sort of wage-cut and that will have to be taken into consideration.

“It’s about survival and making sure there is a job for them to go back to when the pandemic is over.”

Carvell, a Wembley winner with Warrington who began working for the GMB three years ago, is hoping to persuade Super League to provide him with a small cut of the next television deal that would enable him to reach his target of 100 per cent membership, which is the case in Australia’s National Rugby League (NRL).

“It’s about having an input and a voice for the players, who have a lot to contribute towards the game,” he said.

“I’m trying to meet with Super League and sort out player-engagement as part of the upcoming television deal so that we can have a fully functional union within the game rather than being a side issue of the GMB.

“It’s not a massive amount. I think the RLPA in the NRL get about £7.5million from their TV deal but they have to pay for offices and legal people and we’ve got all that.

“So the cost for us is minimal for what it is, and it’s trying to get owners to see that.”