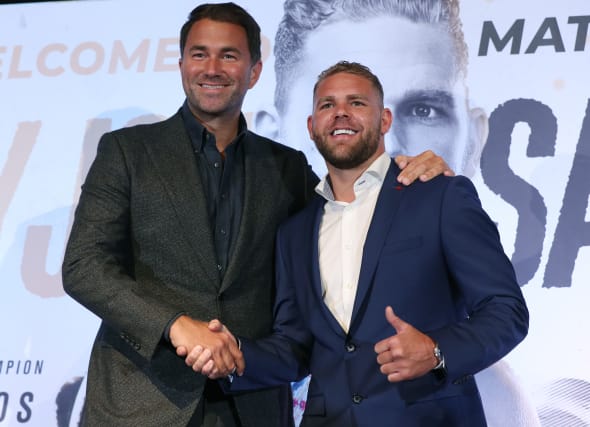 Saunders edged out fellow unbeaten British super-middleweight Callum Smith for a highly sought after bout against Alvarez, the pound-for-pound superstar who has only lost to Floyd Mayweather in a 56-fight professional career.

But a proposed May 2 date which coincides with the Cinco de Mayo weekend celebrations, when Alvarez likes to align his fights, has been called off because of the Covid-19 outbreak that has decimated the sporting calendar.

Muddying the waters about rescheduling the contest are reports in the United States suggesting Alvarez has already agreed to a highly-anticipated trilogy bout against middleweight rival Gennady Golovkin on September 12.

Hearn, Saunders’ promoter, still expects the WBO super-middleweight champion to take on Alvarez this summer, but admitted matters have been taken out of his hands because of the uncertain landscape at present.

“Everything now depends on when the sport begins again because that fight was supposed to take place on Cinco de Mayo, now we know that’s definitely not happening.

“Will boxing return in June or July? If it does then there’s every chance that Billy Joe Saunders will fight Canelo Alvarez during that period and the date of the Golovkin fight will be pushed back.

“Right now, Billy Joe Saunders is actually in Las Vegas, training. We were supposed to have a press conference on Monday to announce the Canelo Alvarez fight.

“No one knows what they’re doing, this is the moment where you’ve got to stay focused and disciplined. I believe Billy Joe Saunders will fight Canelo Alvarez as long as the boxing schedule returns in the summer.”

Hearn announced on Tuesday that his Matchroom events in March and April have all been postponed, while Dillian Whyte-Alexander Povetkin on May 2 and Dereck Chisora-Oleksandr Usyk on May 23 are in doubt.

So too is Anthony Joshua’s world heavyweight title defence against Kubrat Pulev on June 20 at Tottenham Hotspur Stadium.

Hearn added: “They’re all at risk, they’re all in doubt. The truth is, no one really knows right now where we’re going and what pace we’re going.

“Those May dates are the next ones at risk, we’ve probably got a two-week window where we’ll be at the mercy of the Government to let us know what their plans are and particularly how this virus continues to spread and at what rate.

“Right now, May is going ahead but we also understand we have contingencies in place to move Dillian Whyte to the middle of June, to move Dereck Chisora-Usyk back into the end of June, early July.

“We already have a reserve date that we’re discussing with Spurs of July 25 for Anthony Joshua against Kubrat Pulev at Tottenham Hotspur Stadium.”