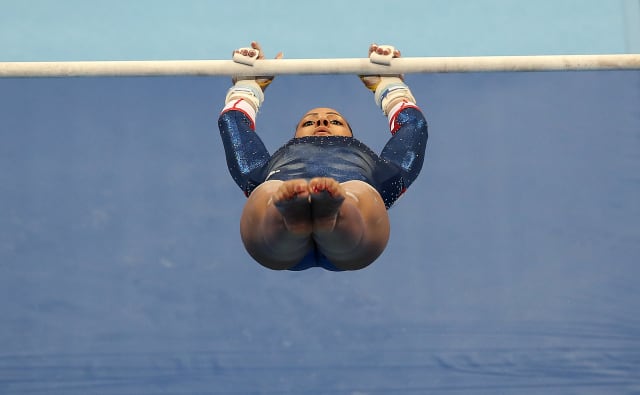 Becky Downie has overcome selection heartache and career-threatening injuries in the pursuit of an elusive Olympic gymnastics medal.

But having got herself in the best shape of her career, culminating in a silver medal at last year’s World Championships, the 28-year-old is facing the kind of setback no amount of sweat and tears can control.

In common with other GB gymnasts, Downie is continuing to train at an eerily deserted sport headquarters in Lilleshall, where admittance requires a daily temperature test and is strictly open to athletes only.

With all upcoming competitions cancelled barring the big one, and continued access to Lilleshall or any other gymnasiums far from assured, Downie admits the uncertainty of the situation is starting to take its toll.

“I’m expecting the Olympics to be postponed and I think that would be the best-case scenario for me at the moment. A cancellation would be devastating after all the hard work I’ve put in to get to this point.”

Downie is targeting Tokyo as the crowning moment of a distinguished top-level career which was scarred by her inability to make the team for London 2012, and by qualifying disappointment in Rio in 2016.

Subsequent, serious elbow and knee injuries set her back further, but Downie rallied to claim an exhilarating silver medal at the World Championships in Stuttgart, pipped only by favourite Nina Derwael of Belgium.

“I wanted to end my career at the Olympics and if it was cancelled I don’t know if I’d want to move into the next cycle in order that I could finish things on my own terms,” added Downie, whose younger sister Ellie also won a medal in Stuttgart.

“I do think that what happened at the worlds last year was the icing on the cake. I know I can look back and say I’ve had an incredible career, but it’s just the not knowing that is really hard at this stage.”

Being asked to peak early and hold their form through a uniquely non-competitive environment represents another challenge for gymnastics, particularly if the Games are pushed back even deeper into the year.

Further public restrictions also jeopardise training opportunities and raise the possibility that a majority of gymnasts may arrive for any eventual Olympics unusually under-prepared.

“Nobody is going to be able to keep up the same intensity for the next 12 months,” added Downie. “And if clubs and gyms start cancelling, that is even more problematic.

“It would be ideal if we could find out in the next few weeks whether it is going to go ahead or be cancelled.

“I can’t really see how it can still happen in the summer. But I have to just take it one day at a time and try not to panic.”