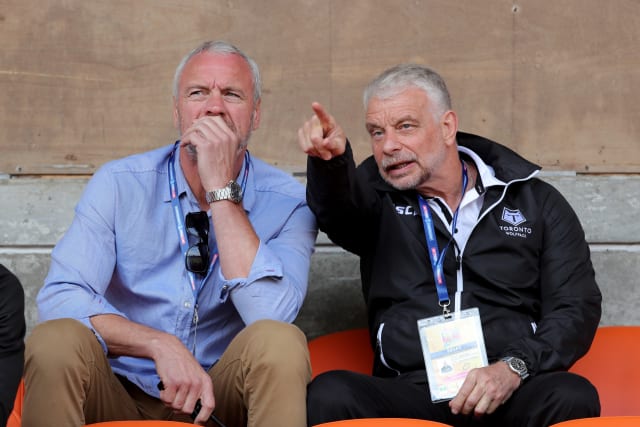 Toronto Wolfpack are being held back by a fear factor and rival clubs’ attempts at self-preservation, according to former director of rugby Brian Noble.

The former Great Britain coach, who stepped down from his role with the Canadian club in February after being with them from the start in 2016, has long accused the Rugby Football League of setting the Wolfpack up to fail.

And in an interview with the Forty20 magazine in which he explains the reasons for his departure, Noble says the governing body has no strategy in place to accommodate overseas teams.

“I’m happy with the decision to step down,” he said.

“It was a difficult one, but in life sometimes if you’ve got standards and morals and a perceived presence in the game, it’s important that you behave in line with your beliefs which should sit above any fears.

“I always said I’d have another look at it once they were in Super League. I did and it’s the right time to move on.

“It’s no secret that a lot of my time, especially over the last year, has been taken up dealing with red tape and that became immensely frustrating after a while.

“My big passion has always been the game and players, they’ve been my drivers and, as you get a little bit further away from that, there is less fun and more business.”

Noble says Toronto’s success in reaching their five-year goal of Super League with two years to spare was achieved in spite of the RFL.

“I still genuinely think that the Wolfpack was set up to fail,” he said. “Ralph Rimmer wasn’t the RFL CEO when he made the comment on our acceptance that ‘this is the harshest deal I’ve ever seen’.

“He was in a position to change it – a fact I kept reminding him – but there was no will to do something and still isn’t.  Maybe that’s because I’m as myopic as all the other clubs with the individual challenges they face.

“But I’m an expansionist too, and you have to give things help to be successful, I don’t care what anyone says.

“The club isn’t seeking favours, just not to be disadvantaged.

“The extreme of that is if it is perceived to have failed, they get relegated from Super League after one season and the ownership group pulls out, what does that say about the sport?

“Are we done with expansion? Is that it then? Is bringing in Ottawa just lip-service? Is there any policy?

“I could stomach all of it if there were different, known, criteria as you progress through each level – and not just for new teams. There isn’t any of that.

“All the clubs in each division have a say and, if you become a threat, there’s a fear factor in what you’re potentially achieving and you hit a lot of brick walls.

“I just hope that if the Wolfpack was to fail, it wasn’t as a result of restrictions placed on the club that no-one else has had to deal with.

“There are no more difficulties than at any club I’ve been part of, just twice the logistics with two bases and one massive difference – they’ve not taken one penny of central distribution to help out with all that.