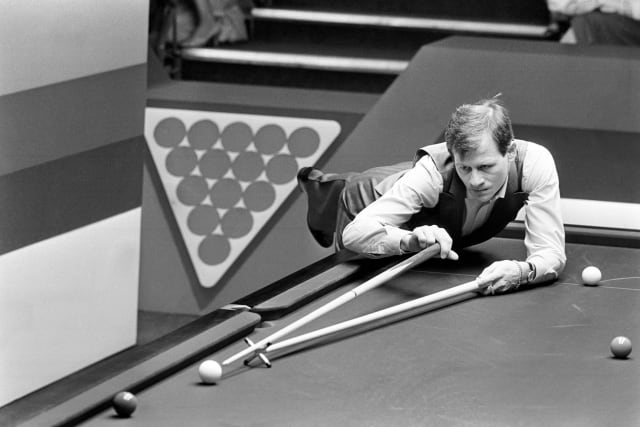 Alex Higgins, who would have celebrated his 71st birthday on Wednesday, remains one of the most famous names in snooker even a decade after his death.

Higgins helped lift sport into a new era of global television audiences with his volatile temperament and his ability to summon dramatic performances when it mattered.

Trailing 15-14 in their best-of-31 clash, Higgins looked down and out when he came to the table trailing 59-0. But he summoned one of the most famous clearances in snooker history, despite constantly falling out of position, to retrieve the frame and go on to win the match and ultimately the title.

Higgins had clawed his way back from 7-0 down in a tempestuous clash with his old rival, and the pair went into a final frame decider locked at 15-15. Higgins held his nerve with a careful break of 44 which ultimately saw him over the line against his shell-shocked opponent.

Needing one more frame to win his second world title 10 years after his first, Higgins capitalised on a loose safety by Reardon to bullet home a long red and stick for the black. It paved the way for a stunning clearance of 135 to take the title – followed by an emotional embrace with his young daughter Lauren.

Beyond his 40th birthday and with his career seemingly set into decline, Higgins roused himself to sink up-and-coming Hendry amid incredibly raucous scenes in the final of the Irish Masters in County Kildare. Every ball of the 62 break which gave the veteran a 9-8 victory was cheered to the rafters by a capacity crowd.

Higgins recorded his highest competitive break against the former Buddhist monk Pichit, who looked on in alarm as the troubled Higgins began crying as he swept up the colours. Earlier in the match, which Higgins lost 10-5, he accused referee John Williams of being “in his line of thought”.