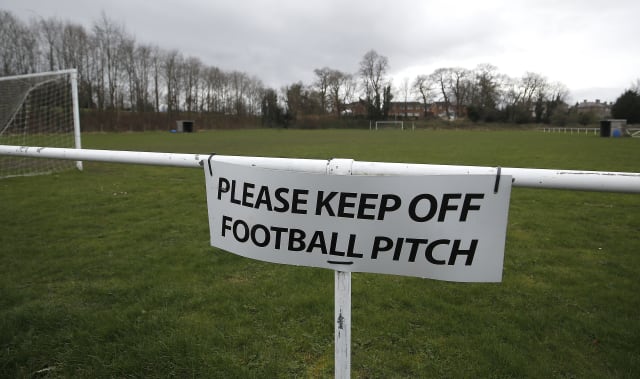 The Italian Football Federation will ask UEFA to postpone Euro 2020 on Tuesday as more sports prepare to shut down due to the coronavirus pandemic.

Rugby union’s Gallagher Premiership is set to be suspended, the PA news agency understands, with Super League likely to follow suit and horse racing in Britain set to move behind closed doors this week.

Officials from all three sports were meeting on Monday to consider their options as the outbreak continued to decimate the sporting landscape.

Officials from the Gallagher Premiership clubs are expected to preempt government advice and postpone the season until further notice.

Super League clubs due to meet in Huddersfield on Monday were already considering their options before news broke late on Sunday evening that Toronto Wolfpack have suspended training and stood down their entire UK-based staff after four players experienced symptoms of coronavirus.

The Canadian club’s action means that their fixture against Wakefield next weekend will almost certainly be postponed and is set to signal a potential shutdown of the league.

A statement from the club read: “We train in an environment where we interact with students and members of the public and we vehemently do not want to act as a possible vector for COVID-19 which is why we have taken this immediate action.

Catalans Dragons captain Remi Casty has taken matters into his own hands.

He told the Perpignan-based L’Independent newspaper: “I’m not sick, I’m not afraid of being either, but I don’t want to catch this virus and pass it on to someone more fragile.

“I have just warned my team-mates and the staff that I will not be present tomorrow (Monday) in training. I made this decision and I will stick to it.”

St Helens coach Kristian Woolf called on Super League and the Rugby Football League to make a clear decision on whether the competition will be shut down following his side’s defeat to Castleford.

“We can’t go week to week wondering what’s going on,” Woolf said. “We need a really good, strong decision and then we can all crack on and figure out what we have to do with it.”

Racing in Britain is set to move behind closed doors later in the week, initially until the end of March.

The Cheltenham Festival took place as scheduled last week, but fixtures in Ireland were closed to the public from Friday evening and it is a similar situation in Scotland following guidance from the Irish and Scottish governments regarding the banning of mass gatherings of more than 500 people.

Aintree’s three-day Grand National meeting is due to take place on April 2-4 and the British Horseracing Authority said: “The UK Government has also been briefed on the issues involved in staging the Randox Health Grand National. A decision will be announced as soon as possible.”

“Since this situation started to develop some weeks ago, the IOC has been constantly updating its stakeholders on the latest developments,” the IOC said in a statement to www.insidethegames.biz.

“The calls are part of this regular information sharing process.”

The remainder of the Boxing Road to Tokyo Olympic qualifying event at the Copper Box Arena will take place behind closed doors due to “the changing situation with Coronavirus and concerns for public, athlete and volunteer welfare,” the IOC Boxing Task Force has said.

New Zealand Cricket has announced the cancellation of the last two rounds of its domestic first-class competition after taking advice from medical experts.

Wellington Firebirds, who finished the truncated season 26 points ahead of Central Stags, have therefore been awarded the 2019-20 Plunket Shield.