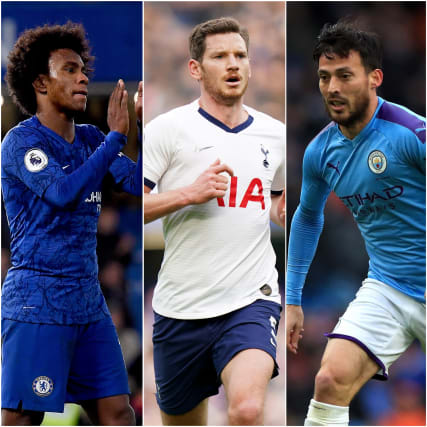 The delay to the Premier League season caused by the coronavirus outbreak could mean uncertainty for those players out of contract this summer.

There will be no games in the top flight until at least April 4 as part of measures to combat the global pandemic.

A longer-term stoppage could see the season run on into the summer, past the standard expiry date of top-level contracts on June 30 – forcing teams to either hand out new deals, agree a short-term solution or replace key men.

Here, the PA news agency looks at some of the highest-profile players who could be affected.

The Spanish playmaker’s memorable decade in Manchester is coming to an end this summer, with him seeking to add a third FA Cup and possibly a first Champions League title to his 11 major trophies with the club – could his ride into the sunset be delayed?

Sidelined by the early-season form of Tammy Abraham, the veteran France striker has deputised effectively as the young Englishman has struggled with injury. Scored in Premier League wins over Tottenham and Everton and the UEFA Super Cup against Liverpool.

The Brazil winger, 31, remains a key man in a largely inexperienced squad under Frank Lampard and his influence would be sorely missed should any end-of-season complications arise. Fellow winger Pedro may be less of a priority but should both be left in limbo, the need to get Christian Pulisic back to full fitness will become more acute.

Toby Alderweireld re-signed in January but his fellow Belgium defender is yet to follow. Scored a late winner against Wolves in the league and also netted in the FA Cup exit to Norwich, while he reached 300 games for the club on Boxing Day against Brighton. Rising defensive star Japhet Tanganga’s own expiring deal features an optional extension which the club are sure to trigger.

The midfielder has returned from an injury-hit spell to make several contributions, notably scoring the late equaliser against Manchester United in October which extended Liverpool’s unbeaten league run. The Reds could also have to negotiate a change of kit supplier, with Nike due to take over the contract from New Balance on July 1.

The teenager has made quite an impact after joining older brother Sean in the Magpies’ midfield, scoring in both meetings with Manchester United – including on his Premier League debut – as well as the FA Cup win over Rochdale. Manager Steve Bruce last month said of his contract: “It’s a concern for us – I hope we can get that tied up.”

Still only 26, the Scotland winger has not enjoyed his most productive season but the Cherries will still be desperate to get a new deal sorted. Their relegation struggle provides a further layer of complication.