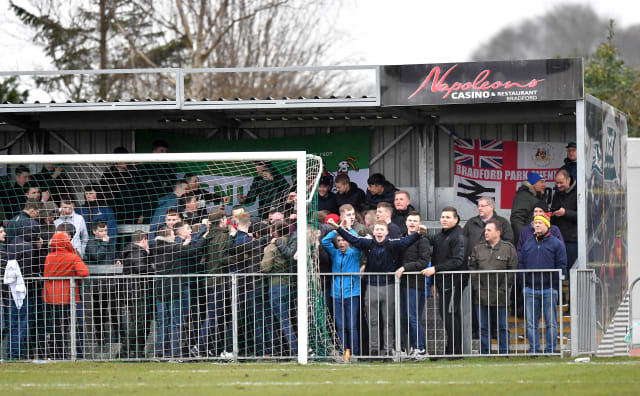 Northern Premier League officials bowed to the seemingly inevitable on Monday and announced a suspension of their fixtures with immediate effect.

The move came just hours after Whitby Town manager Chris Hardy slammed non-league’s failure to show strong leadership on the coronavirus crisis as a “farcical” situation that “could ruin leagues and reputations”.

The NPL had pressed ahead with the majority of fixtures at the weekend and 17 games were scheduled to take place on Tuesday – including Whitby’s trip to FC United of Manchester – before the move came to suspend.

The NPL said in a statement: “The Northern Premier League has today decided, reluctantly, to suspend all fixtures until further notice in light of the escalating Covid-19 outbreak.

“The League would like to congratulate the players, officials, volunteers and fans of clubs able to stage games at the weekend and notes the excellent attendances at those fixtures.

“Whilst the primary responsibility of the League is to the financial sustainability of its member clubs, the number of clubs reporting players or officials in self-isolation has now reached a point at which continuing to play games would severely undermine the integrity of the competition.”

Hardy had raised a series of dilemmas including the prospect of increased exposure during matches, the subsequent potential effects of absence from work, and the risk of passing on the virus to vulnerable relatives.

Whitby players had been due to travel individually to Manchester in order to maximise the opportunity for self-isolation – only to then be expected to play in front of a crowd in excess of 2,000.

Speaking before the announcement of the suspension, Hardy told the PA news agency: “We are talking about something that is bigger than football. I’ve got a work place that I’m trying to keep operational, and there is a danger of me bringing coronavirus into that work place.

“Potentially my mortgage isn’t getting paid, and potentially my family is becoming exposed because of what has ostensibly been over-exposure because of the decision of the league.

“I’ve got a father-in-law who is in hospital at the moment with dementia, and I find myself visiting him after being in and around a football environment.”

The NPL’s announcement brings them into line with all other leagues at step four or above, with the exception of the National League, which is yet to make an official announcement.

At step five, there are further inconsistencies with competitions like the Combined Counties, Western and North-East Counties leagues suspended, but others – including the North-West Counties – due to continue.

A number of NPL clubs took the decision to call off matches on Saturday due to coronavirus concerns, a situation which drew comparison from Hardy to Middlesbrough’s controversial refusal to play their 1996 clash with Blackburn due to ‘flu’.

Hardy added: “Putting the health issues aside, isn’t there a danger that this becomes farcical, in the sense that I happen to get a lot of injuries for tomorrow, so I just pull the ‘corona’ card?

“There are too many inconsistencies at the moment and I think they leave the league a little bit vulnerable in terms of a potential backlash that may come off the back of it.