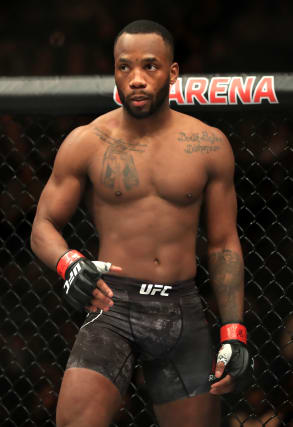 Leon Edwards has confirmed his showdown against Tyron Woodley is off despite the UFC’s insistence that its London event this weekend would be relocated rather than cancelled.

The British welterweight could have put himself in the shop window for a title shot against Kamaru Usman later this year with victory over former champion Woodley in their scheduled headliner at London’s O2 Arena on Saturday night.

But because of the ongoing coronavirus outbreak – as well as the US travel restrictions which now include the UK and Ireland – the UFC announced on Sunday that its show would be moved away from the venue and possibly overseas.

However, Edwards, ranked number four in the UFC’s 170lb division and on an eight-fight winning streak, felt that was not a feasible option for himself or some of his team and has reluctantly withdrawn from the bill.

The Birmingham fighter said in a statement on his social media channels: “We have been working with the UFC on possible solutions to keep the fight alive, but unfortunately with such a short window of time, nothing was viable.

“Myself and my team are all fathers, husbands, sons and brothers, and not all of us can leave our families right now.

“I wish we could have found a way for the fans, I truly do. I have been dreaming of headlining a UFC show in my home country since I started this sport. This cancellation is truly heartbreaking.

“I look forward to this event being rebooked when it is safe to do so, so Tyron and I can put on the show that you all deserve.”

The bout against Edwards would have been Woodley’s first since losing his welterweight crown to Usman last July.

However, the 37-year-old is intent on competing this weekend and called out fellow American Colby Covington.

Woodley said in a video on his Twitter account: “I’m fighting on Saturday, who I’m fighting, I don’t know. Colby Covington is my number one choice.”