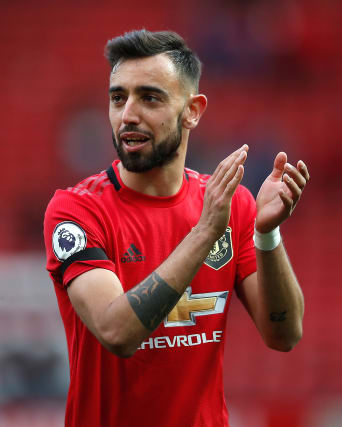 Bruno Fernandes has been crowned Premier League player of the month for February following an exceptional start to life at Manchester United.

Summer interest turned into a prolonged January pursuit for the 25-year-old, with the Old Trafford giants finally getting their man towards the end of the window in a deal worth an initial 55 million euros (£46.6million).

United could scarcely have wished for a better early return from Fernandes, who has hit the ground running since making the big-money switch from Sporting Lisbon.

The Portugal international’s fine displays in February saw him named Premier League player of the month, having also won the PFA’s fan award for top-flight players and the club’s individual honour for February

“Since I was a kid it was a dream to play for Man Utd, and to be there at Old Trafford is the biggest dream of my career,” Fernandes said.

“When you come to a new club you always want to score and the first goal is special. It doesn’t matter how the goal is scored, but important is the goal’s worth.

“I’m happy with my start, but from now I need to give more, to be better.”

The PA news agency understands Fernandes and his United team-mates are due to return to training on Tuesday.

Precautions are in place at the Aon Training Complex due to the ongoing coronavirus pandemic, but the training ground currently remains open.

United won 5-0 against LASK on Thursday in a Europa League last-16 first leg played behind closed doors due to Covid-19 restrictions put in place by the Austrian government.

The club are waiting on Tuesday’s UEFA meeting to find out the implications of the disease’s outbreak on the schedule, while Premier League fixtures have been suspended initially until early April.