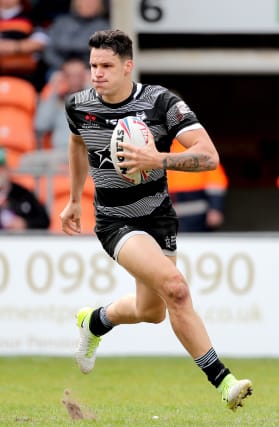 Nick Rawsthorne scored a dramatic injury-time try to see Hull KR avoid a shock with a 22-19 win over battling Leigh in the fifth round of the Coral Challenge Cup at Craven Park.

With the coronavirus pandemic shutting down almost all professional sport, Rovers and Leigh served up a thrilling tie as the Championship outfit led 19-18 at the hooter but Rawsthorne won it for the home side as he went over in the corner.

Rovers were prompted to victory by scrum-half Mikey Lewis, who converted three of their four tries, and owed a lot to the battling display of Kane Linnett who also got his first try of the season to cap a fine performance from the second row.

Leigh had led 12-0 through tries by Adam Higson and Ben Hellewell but three tries in eight minutes from Linnett, Shaun Kenny-Dowall and Will Dagger put Rovers in front by half-time.

Liam Hood’s try tied the game at 18-18 and Josh Woods kicked a drop goal to edge Leigh back in front, but Rawsthorne touched down in stoppage time to seal a dramatic win for the home side in front of a crowd of 2,620, barely a third of Rovers’ average Super League attendance.

Following a quiet start, the visitors made the breakthrough with eight minutes gone from their first attack as Higson touched down in the right corner and Ben Reynolds converted from the touchline.

Leigh went further ahead the next time they threatened the home line as Hellewell fought his way over with 18 minutes gone and an easier kick for Reynolds made it 12-0.

Dagger was held short of the line but the home side were not be be denied when Linnett powered in for Rovers’ first score after 23 minutes and Lewis added the extras.

A penalty just inside Leigh territory led to Rovers’ second try from Kenny-Dowall and Lewis tied the game up from wide on the right.

Offloads by Kenny-Dowall and Elliot Minchella and a high tackle on the latter earned Rovers a penalty, and another from the next set gave the home side field position.

Yet another penalty for holding down kept the pressure on Leigh close to their line and a grubber kick from Adam Quinlan saw Rovers score their third try through Dagger to take the lead.

Lewis’ third conversion put Rovers six points ahead and they held that advantage at the break after Linnett was held up over the Leigh line.

A scrappy start to the second half saw both sides giving up possession but a break by Lewis took Rovers close to the line. Higson held the scrum-half down at the tackle and the Leigh wing was shown a yellow card with 53 minutes gone.

Leigh defended well to keep the home side at bay as they failed to make their man advantage tell and the second half remained scoreless.

Shortly after Leigh were back to full strength, Hood went over from dummy half close to the Rovers line. A third conversion from Reynolds made it 18-18 with 15 minutes remaining.

Woods’ kick edged the visitors back in front with 11 minutes to go but Higson got a second yellow card for a high tackle on Rawsthorne.

A knock-on saw Rovers fail to score from the next set as Leigh defended stoutly despite being a man short, but they suffered late heartache as Rawsthorne crashed over in the corner to win it in stoppage time.