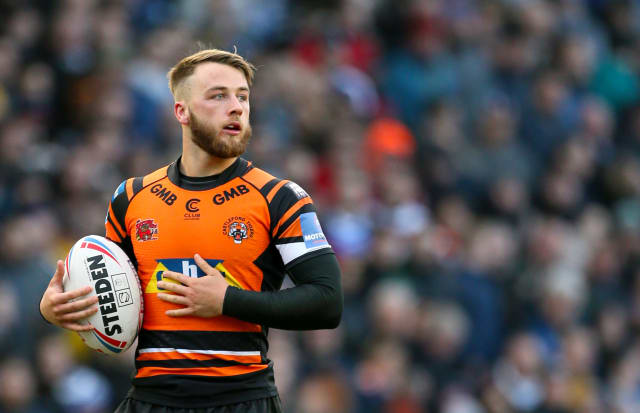 Richardson opted to leave his home-town club at the end of last season after losing his place in Justin Holbrook’s team and joined the Tigers on a three-year deal as a straight replacement for Luke Gale.

“All players that leave a club want to play well against that club and I’ve got no doubt whatsoever that Danny will do the same,” said Wolf, who has succeeded Holbrook in the Saints hot seat.

“I wasn’t familiar with him last year but I have watched a fair bit of him this year and he is playing well for Castleford so he is a bloke we will have to be good at defending.”

Castleford coach Daryl Powell has been delighted with the impact made by Richardson in his half-back partnership with Jacob Trueman and is expecting a big game from him on Sunday.

“It’s obviously an important game for him,” Powell said. “He’ll want to play well, not to prove a point but just do well for his new club. He’s settled in really well.”

Both clubs are boosted by the return of key players, with prop Liam Watts returning from a hand injury for the Tigers and full-back Lachlan Coote ending a five-week absence with a knee injury sustained in the champions’ opening match of the season.

“He was very close last week,” Woolf said. “He wasn’t quite 100 per cent confident and we were very happy to leave it until this week.

“It’s the most players we’ve had available all season. It’s a real positive that we’ve got genuine competition and blokes can be put in their right positions.”

The game has survived the coronavirus pandemic and will be shown live by Sky Sports, whose plans to screen Saturday’s game between Catalans Dragons and Leeds collapsed when it was postponed.

That game was due to be played behind closed doors but Powell is hoping that never happens in England.

“It hasn’t affected us and hopefully it won’t,” he said. “I don’t think playing behind closed doors is an option for rugby league.

“There needs to be some thought. Football can cop it but I don’t think rugby league can. Rugby league clubs aren’t awash with money.

“It’s a tough situation. Everybody got to come up with contingency plans and they might have to be extreme if it gets serious.”