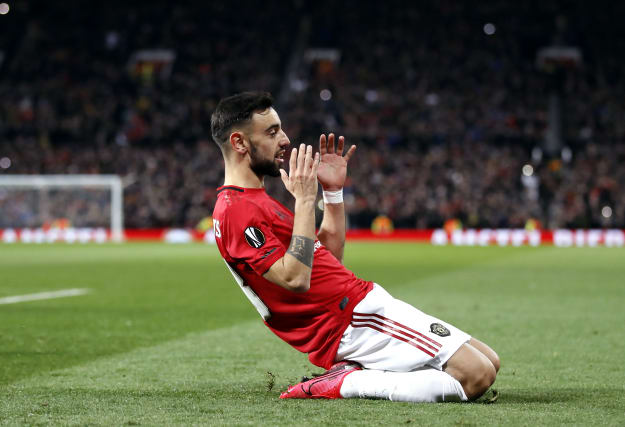 Bruno Fernandes insists his arrival at Manchester United is not the only reason why the club’s fortunes have improved on the pitch.

After an inconsistent first half of the season, United are unbeaten in the nine games Fernandes has featured in since his £47million January move from Sporting Lisbon.

In the Premier League, United are unbeaten in five games and up to fifth place, firmly in the battle for Champions League places.

Fernandes, 25, told Sky Sports: “We can talk about a new start after Bruno, but it’s not about Bruno, it’s about the team.

“One player doesn’t change a team. A team changes when everyone pushes together for the same side.”

The Portugal international shone in last week’s derby victory over Manchester City at Old Trafford and got involved in a spat with opposition manager Pep Guardiola late in the game.

The pair exchanged words and Fernandes then put a finger to his lips in a ‘shush’ gesture towards Guardiola.

Asked about the incident, Fernandes said: “I talked about this with some friends. Some people think, ‘Pep won everything, who is Bruno to do this to him?’

“But at that moment the words he told me made me mad. I have respect for Pep and what he has won and what’s he done for football.

“But he didn’t respect me and he doesn’t deserve my respect at that moment on the pitch.”

Fernandes, who said he “didn’t think twice” about joining United, has already made a strong impact and he hopes to go on doing so for many years to come.

He said: “I want to be the best I can and if it is possible be remembered like one of the best in Manchester.”