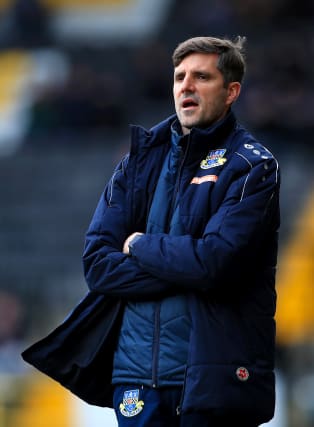 Furious Eastleigh manager Ben Strevens accused the National League of greed and said there was “no way whatsoever” matches should have gone ahead this weekend given the coronavirus pandemic.

The non-league competition controversially announced on Friday that games in their three divisions would proceed as planned despite the ongoing Covid-19 situation wreaking havoc across society and the sporting landscape.

With the Premier League, EFL and a variety of leagues across the continent suspended, Saturday’s non-league clash between Notts County and Eastleigh inadvertently became the biggest game in England.

There were 4,942 in attendance as the hosts ran out 4-0 victors in a match that Eastleigh boss Strevens believes should never have been played.

“For the well-being of the spectators and it’s not only players because they’re young, fit athletes. It’s nothing to do with that.

“I looked around today and there’s stewards that are older. They’re the ones that are most at risk from this virus.

“There’s no way whatsoever these games should have been played.

Responding to Strevens’ comments, National League chief executive Michael Tattersall told the PA news agency: “It’s not really a time for having an argument, it’s a time for reflecting on what’s happening in our society.

“We’re going to put out our own statement thanking everybody for their efforts today and sending everybody who is suffering from the virus or self-isolating all our best wishes.”

It is a case of when rather than if the National League is suspended, leaving Eastleigh chief executive Kenny Amor, like so many club officials, facing an uncomfortable few weeks – and possibly months.

“From what I understand, I think there was a fair bit of pressure put on the National League to try and go ahead with fixtures, just because of the revenue generated by matchdays and how much it means to the cashflow for clubs in our position,” Amor told PA.

“We were less concerned about games being on. We’ve been more affected by our events business and cancellations within that.

“I mean, we are concerned because our last two home games have been called off, so we’re going to potentially go through the whole of March without a home game.

“It does really affect our cashflow, but people’s health is more important.

“It’s more important that the right decisions are made, so we’ll get on with it. It’s just how long something like this could last. Where’s the end?”

National League promotion hopefuls Notts County head into the likely enforced break on the back of a 4-0 win, with Kyle Wootton’s brace complemented by Kristian Dennis and Cal Roberts goals on Saturday.

But coronavirus was the main topic facing Neal Ardley after the triumph, with the County boss saying they are “taking all the necessary precautions”.

“I don’t think I have a personal opinion that I really should be saying,” he said.

“It’s really important at this point to say that there’s a lot of people that make the decisions as to whether these games go ahead or not that have got a lot more facts and data over the risks and rewards than I have.

“We abide by it and if they decide after today that it’s not to be, for a shutdown, then we’ll abide by that as well.”