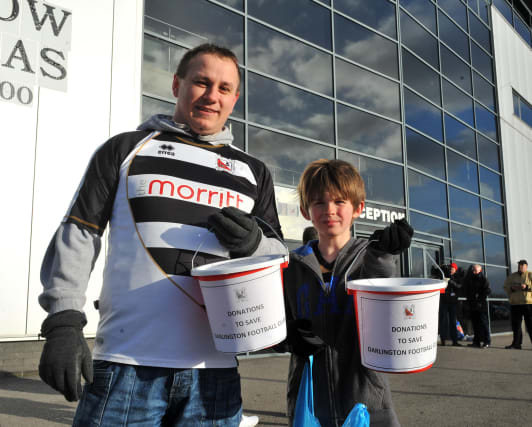 Chief executive officer David Johnston is confident Darlington would survive a complete shutdown of football despite fearing some clubs could be plunged into major difficulties.

The Quakers’ Vanarama National League North fixture against Farsley Celtic went ahead as planned at Blackwell Meadows on Saturday afternoon in front of a crowd of 1,318 – up 135 on their last home outing – despite the Premier League and the English Football League suspending all their games amid the ongoing coronavirus crisis.

However, Johnston is expecting future matches to be postponed and while the implications – for a fan-owned club working their way back up the league pyramid, following demotion to the Northern League in 2012 after a third spell in administration – could be significant, he remains bullish over their future.

Asked if Darlington could survive a lengthy shutdown as they continue to emerge from one of the most testing periods in their 137-year history, he told the PA news agency: “Absolutely, 100 per cent.

“It’s not a risk. The fans are fantastic here, I can support the club as well if need be.

“A lot of the clubs at our level have rich benefactors who are putting money in. We are a fan-owned club, so the funding that comes in from that comes from fans’ donations every year.

“We boost the budget every year. The fans have done a fantastic job raising a seven-figure sum over the last five years in relation to supporting the club.

“But the key thing for us is matchday revenue and if you’re not playing games, you’re not getting crowds in, your cashflow does get tight.”

If part-timers Darlington, whose typical matchday revenue amounts to between £6,000 and £7,000, are hopeful of negotiating an enforced lay-off, Johnston admits many clubs outside of the Premier League could find their resources stretched.

While acknowledging that public health has to be the overwhelming priority, he said: “If you look outside the Premier League, the Championship clubs and all the way down, look at the accounts of any club, it’s tight. It’s always tight for every club.

“Particularly at our level, cash is king. We set budgets at the start of the year and it’s based on projected revenue. We have got players on contracts so these are very interesting times.

“Fortunately, our FA Cup run this year gave us some insulation against that, but it’s how long does it go on for? Our players are normally contracted for 41 weeks, under contract to the end of April.

On the pitch, Alun Armstrong’s men may well have been forgiven for wishing the game had been postponed.

They led 1-0 and 2-1 through Omar Holness’ strike and an Adam Campbell penalty ether side of Dave Syers’ equaliser, but ultimately went down 4-2 as James Spencer, Syers and Adam Clayton wrapped up victory for the visitors.