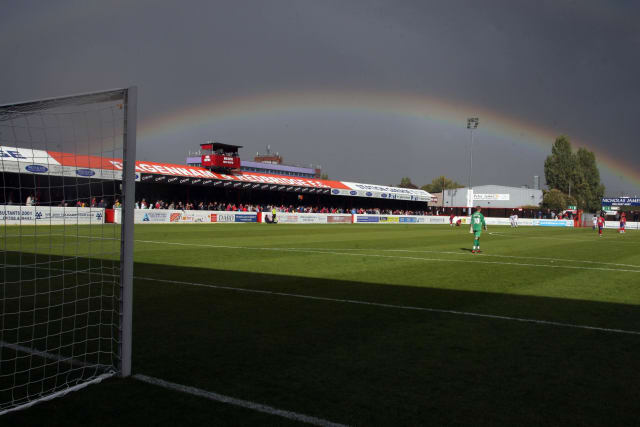 Smaller clubs could fold if the coronavirus forces them to shut up shop, Dagenham managing director Steve Thompson fears.

The Daggers’ National League game at Woking was postponed on Saturday after two of their players and two members of staff started showing signs of the virus.

The league has tried to continue despite the EFL and Premier League postponing all games for three weeks, with six fixtures going ahead on Saturday, although five were called off.

Many, including Dagenham, rely on hospitality and events for a large portion of their income but Thompson can see EFL and National League clubs going to the wall if there is an extended break because of coronavirus.

He said: “Yes, depending on how long it went on. Potentially, some clubs are not going to survive this.

“We’ve got a large social facility with two function rooms and lots of clubs in non league – and League One and Two – rely on that income.

“People will also start to think if they should be attending, lots of the functions we have are 50th wedding anniversaries and birthday parties, do people want their elderly relatives to attend?

“It’s not just the football, it’s everything around it. We are no different to restaurants, bars and hotels who are seeing a downturn in their numbers. We’re all in the hospitality industry.”

Mass gatherings could be banned in the UK next week, taking any decision to play games in the National League out of its hands.

It would leave jobs at risk and Thompson believes losses would be inevitable at clubs and the government should include them in any bailout package for the hospitality industry over lost earnings.

The new chief of the Bank of England, Andrew Bailey, has already warned there would be “damage” to the economy from the virus and small firms would need help.

“Staff will start being laid off and that’s going to have an impact on everybody,” said Thompson. “We employ a lot of part-time staff on zero hours contracts and if we haven’t got games or functions on, those people are not going to be employed.

“That will happen in bars, restaurants, hotels and football clubs. Where you are with full-time staff and players will depend on how long this lasts.

“The government may look at compensating the hospitality and leisure industry for the cancellations and we’ve got to start lobbying the government to make certain we are included in that.”

But Thompson insisted it is foolish to think the Premier League clubs could be the key to helping lower league sides.

“We’re talking £10million to £20million just to support the National League clubs over three or four months,” he said.

“Premier League clubs spend hundreds of millions but the vast majority of that goes on salaries and those players are on contracts.

“Everyone says ‘get the money from the Premier League, they’ve got all this money’ but they spend it.

“They can’t turn around and say ‘we’re going to cut salaries in half and that’ll pay for the problems the rest of football has got because of coronavirus’.

“The FA do have money, not as much to support every club in the country, but they could help. The rest would have to be down to the government.”