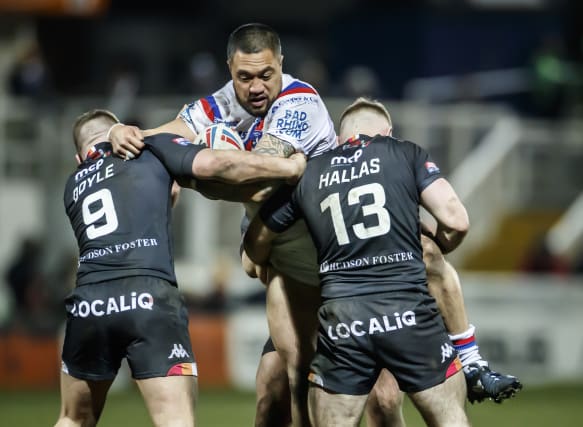 Wakefield held off a brave challenge from Bradford to secure their place in the last 16 of the Coral Challenge Cup with a hard-fought 17-14 win at Belle Vue.

Cup expert John Kear masterminded a shock win over Leeds last season and looked set to repeat the feat against Trinity when his Championship side led 14-7 after 50 minutes.

But Wakefield broke the Bulls’ resistance with two tries in the last 22 minutes to clinch a place in Monday’s sixth round draw in New York.

Wakefield coach Chris Chester says the Challenge Cup has taken priority over Super League for his club this year and he showed his intentions by recalling talismanic duo Danny Brough and David Fifita to his side.

Yet a neutral observer would have found it difficult to work out which was the Super League team, certainly in the first half, as the Bulls matched their opponents in every department.

Full-back Brandon Pickersgill had an early chance for Bradford while Wakefield centre Reece Lyne was held up over the line and Ryan Atkins fumbled the ball as he attempted to ground Tom Johnstone’s pat-down from Jacob Miller’s kick to the corner.

Bulls’ former Leeds scrum-half Jordan Lilley was then brought down just short after a scampering run before he tore away from Joe Westerman’s attempted tackle to finally break the deadlock midway through the first half.

Rowan Milnes’ conversion made it 6-0 but the introduction of Fifita livened up Wakefield’s attack and the home side drew level when Westerman was put through a gap by Brough and juggled with the ball before touching down.

Brough added the goal and Miller nudged his side in front for the first time on the stroke of half-time with a drop goal, but Milnes restored the Bulls’ lead three minutes into the second half with a penalty.

And it was Milnes who scored the next try, dribbling the ball to the line on the first tackle after the count was re-started and pouncing on a ricochet to touch down.

His second conversion extended his side’s lead to 14-7 but the lead was just a point after 58 minutes when Wakefield ran the ball on the last tackle and winger Johnstone took Bill Tupou’s pass and kicked inside for full-back Alex Walker to score his first try for the club.

Brough kicked his second goal but Bradford almost scored again when winger David Foggin-Johnston broke out of his own half and it took a superb rearguard tackle by Lyne to bring him down.

Wakefield were forced into a re-shuffle when Walker went off for a concussion assessment, with Miller switching to full-back, but they were on a roll and Bradford were powerless to prevent Lyne storming over for their third try on 69 minutes.