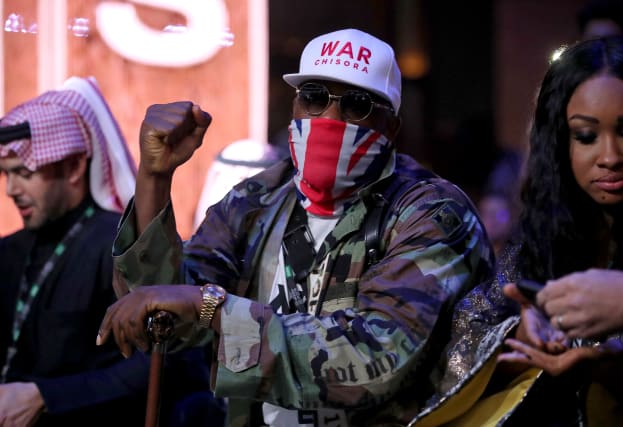 British heavyweight Dereck Chisora claimed he was “ready to die in the ring” in a bid to cause a seismic shock in the division when he takes on Oleksandr Usyk on May 23 at London’s O2 Arena.

Chisora admitted Usyk is by far the superior technician between the two and is therefore banking on his weight advantage and an unwavering will carrying him to an upset win over the former undisputed cruiserweight champion.

With Usyk the mandatory challenger for the WBO heavyweight crown currently held by Anthony Joshua, Chisora revealed the chance to put himself in the frame for a world title shot is spurring him on in training.

Speaking with a trademark Union Flag bandana covering the lower half of his face, Chisora told a press conference: “I have to thank Oleksandr for taking this fight, he’s already at the top, he could easily not take this fight.

“I’m fighting one of the best fighters out there. If I box his way, he’s going to win it, he can dance around me 24/7. I can’t get sparring partners who know how to box like him, so I decided to go unorthodox for the fight.

“I decided I’m going to chuck whatever I can chuck as long as I can last in there.

“The way we’re training, everything else we’re doing, I just hope I don’t scare him too much and cause him to pull out the fight because he’s got the golden ticket and I want to take his golden ticket.

“I’m going to keep coming and coming. I’m ready to go to the other side, I’m ready to die in the ring for this fight.”

While Chisora has lost nine of his 41 professional contests, the 36-year-old is having a late career resurgence and boasts wins over regarded fighters such as Carlos Takam, Artur Szpilka and David Price in the last couple of years.

Usyk, 33, may have a perfect professional record of 17-0 but has only fought once at heavyweight and Chisora’s manager David Haye believes the Ukrainian may have bitten off more than he can chew.

Haye said: “Dereck Chisora isn’t going to try to outbox Oleksandr Usyk, he’s going to drag him into a dogfight from the first second of the round.

“I don’t think Usyk will run, I think he’s brave enough to hold his feet because I believe I believe he feels he’s significantly better than Dereck.

“But what he doesn’t realise is Dereck is a completely different animal to what he’s ever been in the ring with. He doesn’t get what it’s going to feel like against a 120kg wrecking ball, he doesn’t know what that’s like.

“He’s miscalculated what he believes Dereck Chisora is coming to the table with and we’re going to cause a massive, massive upset.”

This fight was originally slated to be held this month but was put back because of an elbow injury to Usyk, which promoter Eddie Hearn admitted was a blessing in disguise because of the global coronavirus pandemic that has led to major upheaval in the sporting schedule.

Hearn said: “I was told ‘you owe Usyk a drink for not going on March 23 because we might have had a major problem’. But just under 11 weeks away, we’re confident that this fight is going to go ahead with no problems at all.”