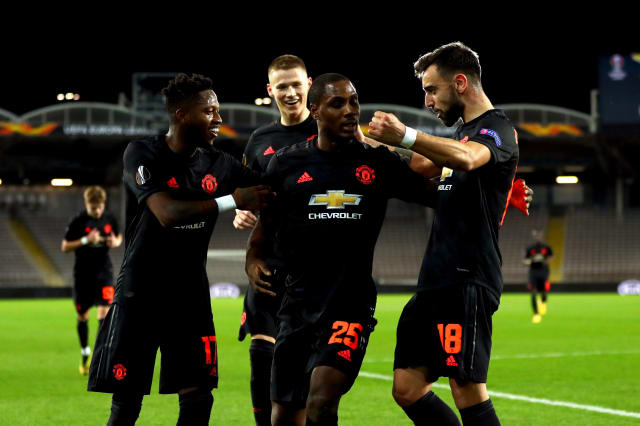 Fresh from sealing a pulsating win against rivals Manchester City at a packed Old Trafford on Sunday, Ole Gunnar Solskjaer's men lined up for this last-16 first leg in front of just 500 people in Linz.

The Covid-19 pandemic meant fans were locked out and United did superbly in challenging circumstances.

It was a faultless away performance in imperfect surroundings, setting up Solskjaer's men to progress when – or rather if – the sides meet for the second leg at Old Trafford next Thursday.

Tuesday's UEFA meeting of European football stakeholders about the coronavirus should make the landscape clearer, having played in what is known locally as a Geisterspiel, which translates 'ghost game', on Thursday.

The absence of atmosphere in Austria led to a lack of intensity at the near empty Linzer Stadion, where Ighalo produced a moment of outstanding quality to put United ahead as he unleashed a stunning strike after juggling the ball.

James' skill and composure put the visitors further ahead in the 58th minute, leading to muffled cheers from the United supporters that had congregated behind a fence outside the ground.

The club helped soften the blow of missing the match by paying the near 700 visiting fans £350 on top of their ticket refund, with media personnel, ball boys and dignitaries among the few allowed in.

There was also a small pocket of LASK fans in attendance as their biggest ever match ended in a comprehensive defeat.

Victory extended United's unbeaten run to 11 matches in all competitions – during which they have kept nine clean sheets – on a night that had a distinct training game feel about it.

United were on top of from the outset, with Bruno Fernandes looking lively, Ighalo proving a nuisance and Mata seeing a close-range effort deflected wide in the 18th minute.

Scott McTominay powered a header wide from the resulting corner but United's pressure eventually told in the 28th minute.

Fernandes passed with the outside of his boot to Ighalo, who juggled the ball from foot to foot before unleashing a fizzing left-footed strike with his fourth touch that flew in off the underside of the bar.

LASK responded well and Eric Bailly produced a fine block to prevent Dominik Frieser levelling as half-time approached, although Harry Maguire went close with a header from a corner.

Luke Shaw was booked for downing Dominik Reiter as LASK looked to make a sharp start to the second half, but the free-kick that followed came to nothing and United settled.

McTominay saw a shot saved as the visitors pushed for a second that would arrive in the 58th minute, when James darted down the left, cut inside and fired past Schlager.

Ighalo hit the foot of the post four minutes later as United looked to compound matters, with the Nigeria international unable to direct home the rebound.

Solskjaer's side were looking more than comfortable and Mata added gloss to the scoreline when turning home after a fine one-two with Fred.

But it did not end there as things got substantially worse for LASK in stoppage time.

First Greenwood raced through to fire in off the foot of the post, before Pereira then caught the hosts cold following a quick-taken free-kick.