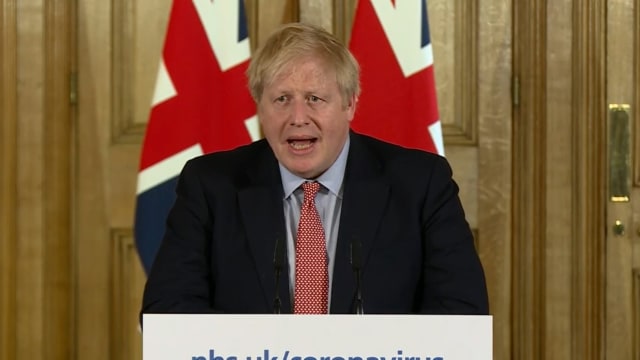 The Government is considering banning sporting events in the United Kingdom but will not do so yet.

Prime Minister Boris Johnson has said the country is now moving into the next stage of its planning to combat the spread of coronavirus.

That could include cancelling large gatherings in the near future, although the main reason for doing that would be to ease the burden on public services.

He said: “On average, one person infects two or three others.

“And that means that most of the transmission actually tends to take place with friends and colleagues and those in close environments – and not in the big environments.”

Sporting fixtures around the world, however, have continued to be affected by the Covid-19 pandemic with many cancelled, including Champions League games, ATP tennis events and most major American sport. The PA news agency also understands the Australian Grand Prix is to be called off.

European football’s governing body, UEFA, will also give major consideration to delaying this summer’s Euro 2020 tournament until next year.

The body has a meeting of its 55 member associations next week to discuss options for all its competitions, including the Champions League, Europa League and Euros. It is understood all possibilities, including moving the Euros or changing its format, will be considered.

Already next week’s Manchester City v Real Madrid and Juventus v Lyon Champions League matches have been postponed, as has “at least” the next two rounds of matches in Spain’s LaLiga.

Real’s players had been quarantined as a precautionary measure after a member of the club’s basketball team tested positive for coronavirus. On Wednesday night Juventus announced their player Daniele Rugani had contracted the virus.

Leicester City have confirmed three of their players are in self-isolation on medical advice from the NHS after showing “symptoms consistent with common seasonal illness”.

Manager Brendan Rodgers said at a press conference: “We’ve had a few players that have shown symptoms and signs. We’ve followed procedures and they have been kept away from the squad.”

The Australian Grand Prix, due to take place in Melbourne this Sunday, has also fallen victim. An announcement is yet to be made but it understood a decision has been taken following a crisis summit involving F1’s hierarchy, governing body the FIA, and a number of team principals.

The issue was forced upon them after a member of the McLaren team tested positive for the virus – leading to the team pulling out of the Grand Prix.

World champion Lewis Hamilton had already questioned why the event was going ahead.

He said: “I am very, very surprised we are here. It’s great we have races but it’s shocking we are sitting in this room.”

Wales’ friendly against the United States on March 30 has been postponed and the Football Association of Ireland has announced all football activity under its jurisdiction has been suspended until March 29.

That came on a directive from the Irish government that all outdoor gatherings of more than 500 people should be cancelled. Horse Racing Ireland has said all its events will take place behind closed doors until March 29.

Similarly, a number of Scottish sporting events are set to be postponed or played behind closed doors following an announcement by First Minister Nicola Sturgeon that she would recommend the cancellation of gatherings of more than 500 people from Monday.

That would mean Sunday’s Old Firm clash between Rangers and Celtic in the Ladbrokes Premiership fixtures could go ahead as planned.

The Guinness PRO14 – which features Scottish, Welsh, Irish, Italian and South African clubs – was also suspended for an unspecified period of time.

America has been hit with Major League Soccer suspended for 30 days, the NBA halted indefinitely after a Utah Jazz player tested positive and the NHL also paused.

The Miami Open tennis tournament has been cancelled as the men’s ATP Tour has announced a six-week suspension of activity. Also in Florida, the PGA’s Players Championship will continue without spectators on site from Friday.

A statement from the International Olympic Committee on Thursday reaffirmed its commitment to the 2020 Games in Tokyo going ahead as scheduled, starting on July 24.

“With 19 weeks before the opening ceremony of the Olympic Games Tokyo 2020, the many measures being taken now by authorities all around the world give us confidence and keep us fully committed to delivering Olympic Games that can bring the world together in peace.”