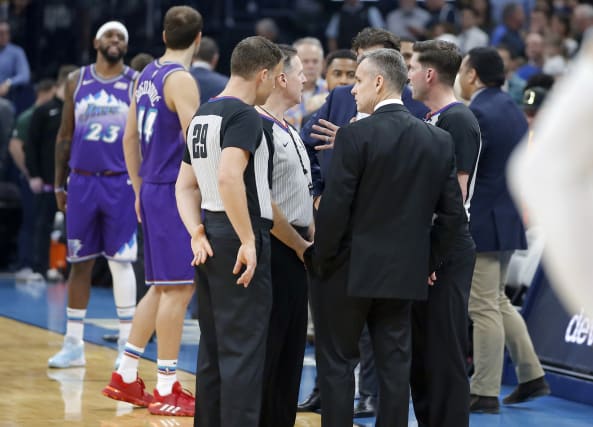 The NBA season has been suspended “until further notice” after an unnamed player from the Utah Jazz tested positive for coronavirus, with the outbreak continuing to rip through the sporting schedule.

The NBA’s decision came as F1 world champion Lewis Hamilton expressed his surprise that his sport was pressing on with starting its season this weekend, calling it “shocking”.

American basketball was suspended after the league was advised of the positive test shortly before the scheduled game between the Utah Jazz and Oklahoma City Thunder on Wednesday night.

The NBA said in a statement: “The NBA is suspending game play following the conclusion of tonight’s schedule of games until further notice.

“The NBA will use this hiatus to determine next steps for moving forward in regard to the coronavirus pandemic.”

Utah said the player, who was not at the arena, had been tested as “a precautionary measure” in consultation with NBA medical staff and Oklahoma health officials.

The team said in a statement: “When it was determined that the individual would be tested, we immediately informed the league office.

“The health and safety of our players, our organisation, those throughout our league, and all those potentially impacted by this situation are paramount in our discussions.”

It said the player was “currently in the care of health officials in Oklahoma City”.

Hamilton described the decision to continue with this weekend’s season-opening Australian Grand Prix as “shocking”.

The race in Sydney is set to go ahead as scheduled despite increasing global lockdowns and Hamilton told his pre-race news conference: “I am very, very surprised we are here.

“It’s great we have races but it’s shocking we are sitting in this room.”

Five F1 team members have been advised to go into self-isolation in Sydney after displaying symptoms which could indicate coronavirus.

“[There are] so many fans there and it seems like the rest of the world is reacting – probably a little bit late,” Hamilton said.

“We are seeing Trump shutting down the borders, the NBA has been suspended yet F1 continues to go on.”