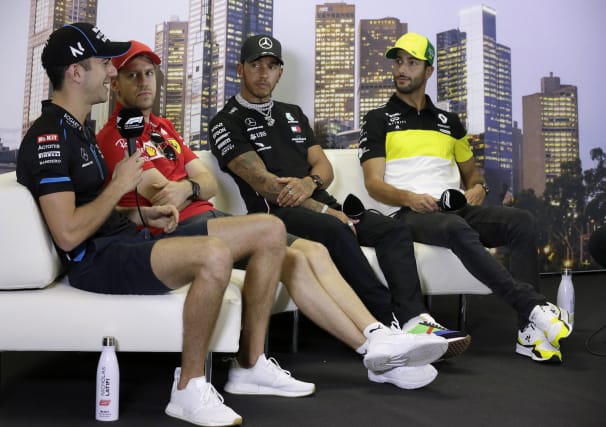 The Australian Grand Prix has been thrown into major doubt following McLaren’s withdrawal from the event after a team member tested positive for coronavirus.

The British individual, a mechanic for the country’s most successful Formula One team, was informed of the result at 9pm on Thursday night in Melbourne.

The positive result came just hours after Lewis Hamilton claimed the sport’s bosses were putting lives at danger by staging the opening race despite the global outbreak of a disease which has claimed more than 4,600 lives.

It is now conceivable that the grand prix could be postponed, with 300,000 fans expected at Melbourne’s Albert Park over the next few days.

A statement from Formula One read: “Formula One and the FIA have been coordinating with all the relevant authorities on the next steps.

“Our priority is the safety of the fans, the teams and all personnel at the race.”

McLaren had planned to pull out of the sport’s season-opening race if the crew member, who went down with the illness on Wednesday, tested positive.

A little more than an hour after McLaren received the diagnosis, they announced they would play no part in this weekend’s race.

The individual remains in quarantine at the team’s hotel in downtown Melbourne. It is understood that at least a dozen other of the team’s staff are in self-isolation after coming into contact with the individual who arrived from England earlier this week. They are showing no symptoms related to the disease.

A statement from the British team read: “McLaren Racing has confirmed this evening in Melbourne that it has withdrawn from the 2020 Formula One Australian Grand Prix, following the positive test of a team member for the coronavirus.

“The team member was tested and self-isolated as soon as they started to show symptoms and will now be treated by local healthcare authorities.

“The team has prepared for this eventuality and has ongoing support in place for its employee who will now enter a period of quarantine.”

McLaren will now take direction from the local authorities regarding their next steps. American outfit Haas, meanwhile, have confirmed that all four team members who were tested for the virus over the past two days have come back with negative results.

In all, it is believed nine people have been tested for the illness, none of which are from Hamilton’s Mercedes team.

“I am really very, very surprised that we are here,” he said. “For me, it is shocking that we are sitting in this room.

“It seems like the rest of the world is reacting, probably a little bit late, but we have seen [US president] Donald Trump shut down the borders from Europe to the US, the NBA has been suspended, yet Formula One continues to go on.”

Asked why he thought the sport’s chiefs and its governing body, the FIA, had pushed ahead with the event, Hamilton, 35, said: “Cash is king. I don’t feel like I should shy away from my opinion.

“The fact is we are here and I just urge everyone to be as careful as you can be in terms of touching doors and surfaces. For the fans, I hope they take precautions, too.

“I was walking through the paddock and saw everything going ahead as normal as if it is a normal day, but I really don’t think it is. I saw Sir Jackie Stewart in the lift this morning looking fit, healthy and well, and other elderly people, too. I hope the fans stay safe and we don’t see any fatalities or anything come out in the future.”

On Thursday night, there were unconfirmed reports that other personnel within the paddock have fallen unwell, but they have been instructed by their teams to stay away from the paddock, rather than follow the official protocol of being tested.

Four-time world champion Sebastian Vettel, a director for the Grand Prix Drivers’ Association, did not shut down suggestions that the grid might refuse to race if it is confirmed a team member was infected.

“We are a group of 20 guys and we got together over the years in various circumstances and I think we share common opinion on big decisions and that would be a very, very big decision.

“We would be mature enough to look after ourselves and pull the handbrake in that case.”