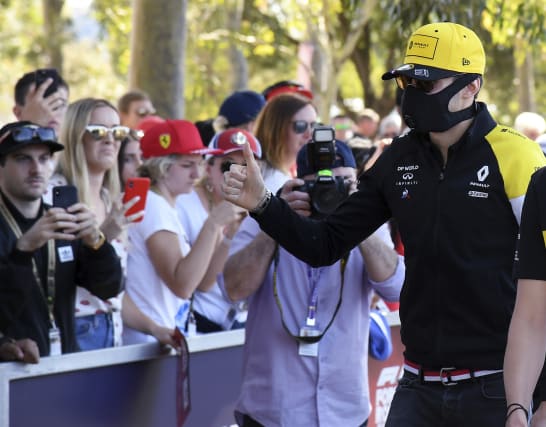 Formula One has confirmed the season-opening Australian Grand Prix is off.

The official verdict arrived just after 10am local time in Melbourne following almost 12 hours of confusion sparked by McLaren’s withdrawal in the wake of a staff member testing positive for coronavirus.

The statement from F1’s governing body, the FIA read: “Following the confirmation that a member of the McLaren Racing Team has tested positive for COVID-19 and the team’s decision to withdraw from the Australian Grand Prix, the FIA and Formula 1 convened a meeting of the other nine team principals on Thursday evening.

Sources indicated to the PA news agency in the early hours of Friday that the race would be scrapped. But the failure by F1’s American owners’ Liberty Media and the FIA to act quickly resulted in thousands of fans arriving at the Albert Park venue for practice.

The chairman of the Australian Grand Prix corporation even told local breakfast television that the race would go ahead as planned.

Just moments before F1 – who will now face strong criticism for their handling of the eventual cancellation – confirmed the race would no longer go ahead, Lewis Hamilton’s Mercedes team revealed they had written a letter to the sport’s bosses requesting for the race to be scrapped.

A statement from the sport’s reigning world champions read: “We share the disappointment of the sport’s fans that this race cannot go ahead as planned. However, the physical and mental health and wellbeing of our team members and of the wider F1 community are our absolute priority.

“In light of the force majeure events we are experiencing with regards to the coronavirus pandemic, we no longer feel the safety of our employees can be guaranteed if we continue to take part in the event.

“We do not feel it would be right to participate in an event where fellow competitors such as McLaren are unable to do so through circumstances beyond their control. Our team will therefore begin pack-up preparations at the circuit this morning.”

F1’s eventual move to call off the race follows the tide of the sporting world after a series of events were cancelled or delayed in response to the virus which has claimed more than 4,600 lives.

Hamilton had earlier heaped pressure on the sport’s bosses by claiming they were putting lives at danger with 300,000 fans expected to have arrived through the gates of Albert Park over the weekend.

A British mechanic was told he had tested positive for the coronavirus at 9pm on Thursday. A little more than an hour later, his McLaren team informed F1 and the FIA that they were pulling the plug on their participation here this weekend.

The individual remains in quarantine at the team’s hotel in Melbourne. It is understood that at least a dozen other McLaren staff are in self-isolation after coming into contact with the man who arrived from England earlier this week. They are showing no symptoms related to the disease.

In all, nine people connected with the sport – none of whom are from Hamilton’s Mercedes team – have been tested for the virus, seven of which have returned negative, one positive, and one is still awaiting their results. McLaren will now take direction from the local authorities regarding their next steps.

“I am really very, very surprised that we are here,” he said during the official press conference to preview Sunday’s event.

“For me, it is shocking that we are sitting in this room. It seems like the rest of the world is reacting, probably a little bit late, but we have seen [US president] Donald Trump shut down the borders from Europe to the US, the NBA has been suspended, yet Formula One continues to go on.”

Asked why he thought the sport’s chiefs and its governing body, the FIA, had pushed ahead with the event, Hamilton, 35, said: “Cash is king. I don’t feel like I should shy away from my opinion.”

Next weekend’s Bahrain Grand Prix, which was already set to be staged behind closed doors, now looks unlikely to take place, while the inaugural race in Vietnam, scheduled for April 5, is also under major threat. Following the postponement of the Chinese Grand Prix, the season could now start in Holland on May 3, but that is also subject to change given the fluid situation surrounding the global pandemic.