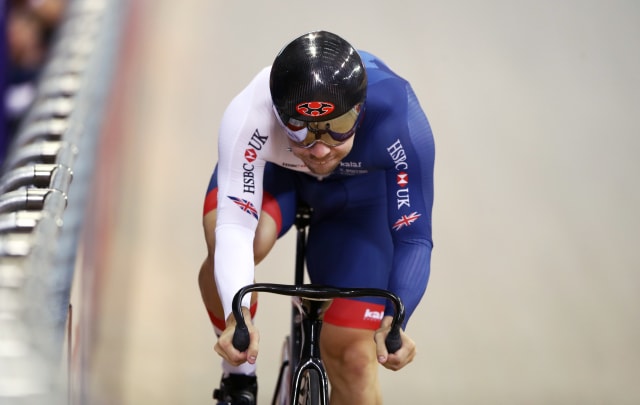 Two-time Olympic champion Phil Hindes insists he does not expect his past achievements to count for anything as he battles for selection in Great Britain’s men’s team sprint squad for Tokyo.

Hindes, a gold medallist in both London and Rio, has barely been seen in GB colours over the past year as he battled tendinopathy in his hip, and has had to watch Jack Carlin and Ryan Owens establish themselves alongside six-time Olympic champion Jason Kenny in Britain’s first-choice line-up.

With less than five months to go until the Tokyo Games, Hindes finds himself a reserve role but says he accepts his lot.

“It’s disappointing for me but in the end I want the fastest team to ride,” Hindes told the PA news agency. “If I’m not faster than the other guys I don’t want to be in the team just because I’ve been to previous Games.

“I don’t feel I deserve to be in the team at the moment. I haven’t been faster than the other guys. I’ve accepted it. I’m just trying to get up to form now.”

Hindes insists the injury has not bothered him while actually on the bike, but it has limited him during the vital gym work the sprinters undertake. At a time when competition for places is at its peak, the slightest setback can have huge consequences.

“There’s nothing really you can do about it,” Hindes said. “The team is so competitive, if you’re not on your best form then it’s pretty much game over. I’ve accepted it. It’s sport.

“At the moment I’m pretty much the reserve for the Olympics so I’d travel as the fourth man. My goal is just to support the team and step in if someone gets injured.

“I’m trying to get back to the world standard. I can ride in all three positions in the team so if one of the other guys gets injured I’m pretty sure I can ride a world-class man one, man two, or man three.”

Hindes rode as man one – leading the trio around the first lap before peeling off – in both London and Rio.

He tried his hand at man two following the 2016 Games, at a time when it appeared Kenny may not return, but with Carlin flying in that role, Hindes has now switched his primary focus back to the man one position currently occupied by Owens – another adjustment he admits has cost him peak form.

Hindes raced in the qualifying round of last year’s Track Cycling World Championships in Pruszkow, but was not seen again in GB colours until the Brisbane round of the World Cup in December, travelling to this year’s Worlds in Berlin as a reserve but not racing.

After that long, lean period of competition Hindes will line up at Six Day Manchester at the National Cycling Centre this weekend, a vital opportunity to get some racing in the legs as Tokyo looms.

“It will be great to be racing again,” Hindes said. “Six Day is really good preparation and it will be great to get a hit out again in a last big push for the Games, especially riding in front of your home crowd.”