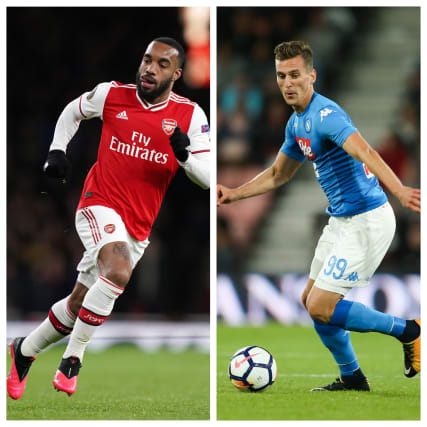 Tottenham and Arsenal are set to battle for the signature of Napoli forward Arkadiusz Milik at the end of the season, according to website Calcio Napoli 24. Arsenal have been eyeing the Poland international as it appears increasingly likely striker Pierre-Emerick Aubameyang may leave in the summer. Spurs are on the lookout for more strike power, having been exposed by the loss of Harry Kane and Son Heung-min to injury this season.

Alexandre Lacazette could also be set to leave Arsenal, with Atletico Madrid set to launch a bid for the striker, Spain’s Mundo Deportivo reports. The 28-year-old France forward has emerged as a chief target for Atletico since Diego Costa has endured a sub-par season. Lacazette recently signed a contract with Arsenal until 2022 but is rumoured to be open to a move.

Liverpool are set to make another bid to sign 17-year-old Jeremy Doku from Anderlecht this summer, the Daily Star reports. The young striker has hit the headlines in recent weeks with three goals and four assists. Liverpool tried to secure Doku last year but the potential move fell through.

Djibril Sidibe is keen to make his loan spell at Everton permanent, the Liverpool Echo reports. The 27-year-old Monaco and France full-back told French television “everything is green lit” from his point of view to signing full-time with the Toffees. Everton could now trigger the option to buy him, with the agreed fee around £12.7million.

Dries Mertens: The striker who is a target of several European clubs will stay at Napoli, Calcio Napoli 24 reports.

Bukayo Saka: The 18-year-old Arsenal midfielder is a target for Liverpool and Manchester United but Mikel Arteta is moving to keep him with the Gunners, the Daily Mirror reports.

Paul Pogba: The France midfielder might yet stay at Manchester United, with Ole Gunnar Solskjaer saying talks on his future will be held soon, according to the Mirror.