Sorry Spurs bow out of Champions League with a whimper 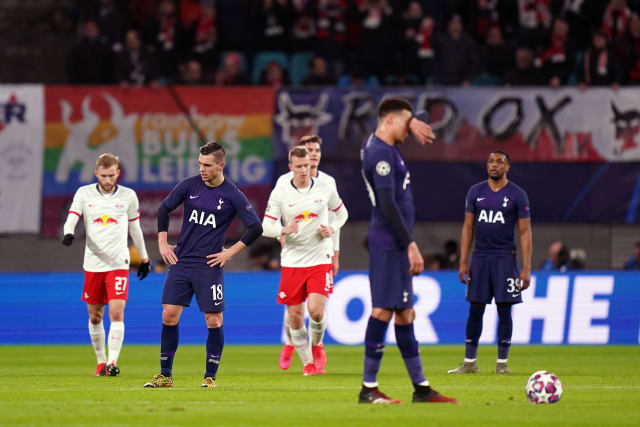 Tottenham were unable to deliver another Champions League miracle as they were torn apart by RB Leipzig in the last 16.

Shorn of key players in attacking areas, Spurs had to overcome a 1-0 first-leg deficit but slumped to a 3-0 defeat in east Germany and crashed out.

Marcel Sabitzer scored twice in the opening 21 minutes, Hugo Lloris culpable for both goals, to put the Premier League club on the brink of elimination and they were unable to reproduce their remarkable comeback from the same situation at Ajax in last season’s semi-final.

Emil Forsberg completed the rout late on with his first touch as Spurs bowed out with a whimper.

Defeat, on a back of a disappointing exit to Norwich in the FA Cup last week, leaves Jose Mourinho with no prospect of silverware this season.

There were mitigating circumstances for this defeat given his side were missing the likes of Harry Kane, Son Heung-min, Moussa Sissoko and Steven Bergwijn.

But the way they were unable to repel Leipzig over the two legs highlights how weak they are in defence, with goalkeeper Lloris also letting them down.

The Bundesliga side, though, managed by 32-year-old manager Julian Nagelsmann, nicknamed ‘Baby Mourinho’, moved into the Champions League quarter-finals for the first time in their history.