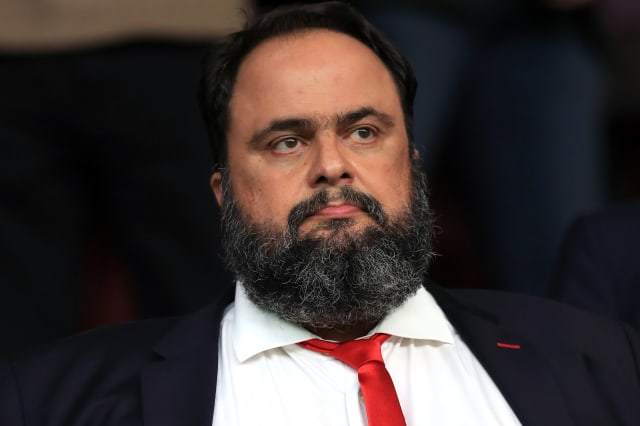 The Greek businessman – also owner of Olympiacos, who are due to play Wolves behind closed doors in the Europa League on Thursday – attended Friday night's Sky Bet Championship match against Millwall, where he reportedly met with the first-team squad.

He revealed on Instagram on Tuesday morning that he was now following the advice of doctors regarding self-isolation.

Marinakis said: "The recent virus has 'visited' me and I felt obliged to let the public know."

"Nottingham Forest can confirm that owner Evangelos Marinakis has tested positive for the coronavirus," a club statement read.

"Mr Marinakis was diagnosed after showing the first symptoms on his return to Greece yesterday afternoon. During his short stay in Nottingham last week he did not show any symptoms of the virus.

"The club are seeking advice from medical professionals and the relevant governing bodies to ensure the correct measures are taken."

It is understood an initial discussion has taken place between Forest and the English Football League, and that those conversations will continue throughout the day to ascertain what the situation is.

As of Tuesday afternoon, Greek Super League leaders Olympiacos were still planning on hosting Wolves, but the Premier League club have asked UEFA to postpone the fixture, the PA news agency understands.

A decision on the last-16 tie is expected in the next 24 hours, with Wolves reluctant to travel to Athens after Olympiacos owner Marinakis contracted coronavirus.

The Greek government has enforced a two-week suspension of spectators attending sporting events due to the outbreak of Covid-19, with the game due to be played behind closed doors.

Elsewhere, the Republic of Ireland's Euro 2020 play-off semi-final in Slovakia will now be played behind closed doors.

The Slovakian football association (SFZ) has confirmed that no spectators will be allowed into the game in Bratislava on March 26.

A statement on the SFZ's website read: "At a meeting of the SFZ executive committee held today (Tuesday, March 10) at the SFZ headquarters in Bratislava, it was decided about the fate of the relegation match for the European Championship against Ireland.

"On the basis of measures taken by the state authorities in connection with the spread of coronavirus, but also communication with the European Football Union UEFA and the Irish side, VV approved the play-off of Slovakia-Ireland without spectators."

The Bosnia and Herzegovina federation has confirmed ticket sales for this month's Euro 2020 play-off match with Northern Ireland, which were set to go on sale on Wednesday, have been suspended.

A post on the club's Twitter account read: "LASK has announced that the home game against @ManUtd scheduled for Thursday must take place without a spectator. The association will provide further information after publication of the relevant decree."

Austrian Bundesliga chairman Christian Ebenbauer told www.oefbl.at: "Of course we all prefer to watch atmospheric games with many spectators, but we are experiencing an exceptional situation across the country.

"We fully trust the experts responsible and of course implement the measures to protect the population. Like other organisers, these measures are associated with massive organisational and financial challenges for us and our clubs."

Barcelona, meanwhile, are one of several clubs to confirm their European tie will be played behind closed doors.

The Spanish side confirmed on Tuesday morning the Champions League last-16 second leg with Napoli – scheduled for Wednesday at the Nou Camp – will take place without any fans in attendance.

Paris St Germain's match with Borussia Dortmund on Wednesday and Roma's Europa League game against Sevilla in Spain the following night will also be played behind closed doors.

At least the next two rounds of LaLiga matches will be played with no fans in attendance following updated advice from the Spanish authorities.

A spokesperson for LaLiga said: "According to information from the High Council of Sports (CSD), LaLiga Santander matches will be played behind closed doors, starting today (March 10) and for at least the next two weeks.

"LaLiga will continue to be in permanent contact with the Ministry of Health and the CSD to follow its recommendations and/or decisions, prioritising the health of fans, players, club employees, journalists etc, due to the Covid-19 health crisis.

"For weeks, LaLiga has been working on alternative plans in co-ordination with UEFA in case health authorities decide to suspend any match, creating a plan to play these matches."

Sports bodies met with government ministers in the UK on Monday at a meeting chaired by the Department for Digital, Culture, Media and Sport (DCMS) to discuss contingency plans in relation to Covid-19.

There has been talk Premier League and EFL games could be played behind closed doors but Gary Neville, the joint-owner of Sky Bet League Two side Salford, has joined those rejecting that as an alternative.

"I do NOT support matches played behind closed doors," former England and Manchester United defender Neville said on Twitter.

"If it's necessary to shut down stadiums the associations must find a way of delaying the season and playing the games when it is safe to do so to protect the revenues for clubs that require this income to survive."

He said: "The reason why we do the job is for the people. If the people cannot come to watch the games, there is no sense."

Fellow Premier League side Newcastle United have told fans that players will not sign autographs during the coronavirus crisis.

In rugby, the France v Ireland Six Nations match was postponed on Monday. Ireland had been due to play the match in Paris on Saturday, but it will now not go ahead on the advice of the French government.

All domestic sporting action has been suspended in Italy after prime minister Giuseppe Conte announced at a press conference that the whole country would be on lockdown from Tuesday morning.

The country's national Olympic committee (CONI) originally made the announcement on Monday, but CONI's jurisdiction does not cover Italian clubs or national teams involved in international competitions, such as football's Champions League.