No Bosnia fans would be a boost for Northern Ireland, says Michael O’Neill 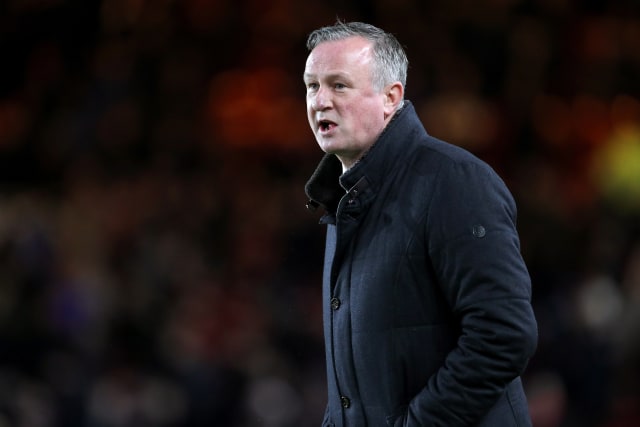 Michael O’Neill believes Northern Ireland could benefit if their scheduled Euro 2020 play-off semi-final away to Bosnia and Herzegovina is played behind closed doors later this month.

The Bosnian Football Federation on Tuesday postponed ticket sales for the match due to ongoing fears over the spread of the coronavirus, suggesting the match is likely to take place without fans if it goes ahead as scheduled at all.

Having experienced a partisan Bosnian home crowd when Northern Ireland lost 2-0 in Sarajevo in the Nations League in October 2018, O’Neill admitted the lack of a crowd in Zenica on March 26 could help his side.

“We played Bosnia in the Nations League and while it was a small stadium the atmosphere was very intimidating, very patriotic,” O’Neill said. “From that point of view, for our sake, it is something slightly to our advantage.”

Despite the news coming from Bosnia, O’Neill said he would continue his preparations as normal, having on Tuesday named a 26-man squad which sees Jordan Jones and Conor Washington return from injury.

“Having been involved in international football for eight years I know you can have the best preparation in the world going into a game, but ultimately it’s what happens in the week going into a game that matters most, whether down to player availability or whatever situation you’re faced with,” O’Neill said.

“This is another situation that’s not really in our control so dwelling on it too much is not really beneficial.”

Bosnia beat Northern Ireland both home and away in the Nations League but are under new management since then, with Dusan Bajevic having replaced Robert Prosinecki in December.

From a Bosnian perspective, there are fears the coronavirus outbreak could leave Bajevic without his two most influential players against Northern Ireland.

Edin Dzeko (Roma) and Miralem Pjanic (Juventus) play their club football in Serie A and may find themselves in the same situation as Wales’ Aaron Ramsey, who is expected to miss his country’s upcoming friendlies against Austria and the United States due to the lockdown in Italy.

“Naturally that would be a boost, but we can’t really rely on that situation,” O’Neill said. “I’m sure the Bosnian FA will be doing everything possible to get them out of the country.

“It’s something that is not really a concern to us.”

From his own perspective, O’Neill’s only major absentee at this stage is Corry Evans, who required surgery on his frontal lobe and eye socket after suffering a fractured skull in January.

“No doubt he’s a loss because he gives us flexibility, whether we play him in a central area or on the right,” O’Neill said.

“He’s such a good player tactically, he’s good when you don’t have the ball, good in the pressing game when you need someone to nullify the threat of an opposition. It’s a big blow, especially given the nature of the injury.”

Though he is not available to play, Evans is expected to travel with Northern Ireland to Bosnia as part of the group.

However, Rangers winger Jones has overcome a knee injury, making his first appearance in over a month when he came on as a late substitute against Ross County on Sunday, while Washington returns having missed the end of the qualifying group stage with a hamstring injury.

O’Neill could be taking charge of Northern Ireland for the final time in the match. The 50-year-old was named Stoke boss in November, but the deal included an agreement he would see out the Euro 2020 qualifying campaign with the Green and White Army before standing down.