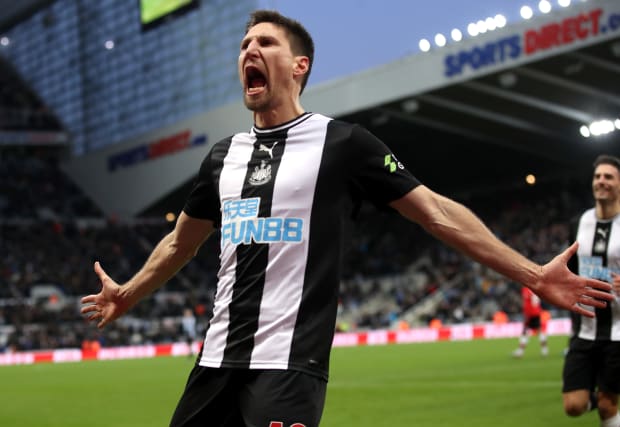 Federico Fernandez has set his sights on getting Newcastle across the Premier League finishing line after the club exercised a one-year option on his contract.

The 31-year-old Argentinian defender is the third senior player to extend his stay a St James’ Park in a matter of days after midfielders Jonjo Shelvey and Matt Ritchie both signed contract extensions last Friday.

Fernandez, who joined the Magpies from Swansea during the summer of 2018, told NUFC TV: “I’m very happy with the news – another year in the Premier League, with Newcastle.

“It’s been a good time at the club, so when I spoke with the boss this morning and he told me the club wanted to do this, I told him that of course, for me and my family, it’s good to know, and at this stage as well.

“Hopefully now we can push for the last few games to try to get more points, and I’m very happy about the news.

“To stay in the Premier League, to stay here and feel important, that for me is the main point – to be fit, try to help the club and try to push in every game I can play.”

Fernandez has 47 appearances to his name to date, the last of them in Saturday’s 1-0 win at Southampton which took them to 35 points with nine games remaining, and is one of six central defenders in the most competitive department in head coach Steve Bruce’s squad.

Bruce said: “It’s really good news to get Fede tied up. He has had a great season and richly deserves this recognition.

“He is a great professional. He trains and works incredibly hard for the team and he continues to be a positive influence around the place. We’re delighted to have him.”

The Newcastle head coach will now hope brothers Sean and Matty Longstaff will follow suit with the latter’s existing deal due to expire at the end of the current campaign.