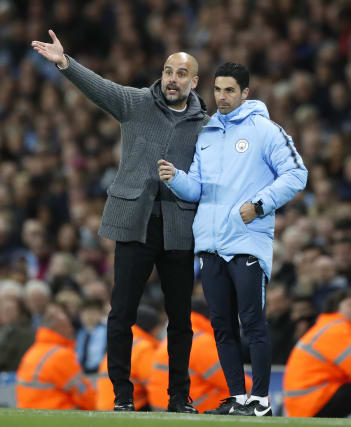 Mikel Arteta insists he cannot simply “copy and paste” the philosophy of Pep Guardiola onto his Arsenal side.

The Gunners head coach Arteta will return to former club Manchester City for the first time on Wednesday night.

The 37-year-old left the Etihad Stadium, where he was employed as Guardiola’s assistant, in December to replace Unai Emery in the Arsenal hot-seat.

They have not won at City since 2015 but if Arteta can secure victory on his comeback, his side will close within two points of Manchester United in fifth.

But, despite enjoying plenty of success during his three-and-a-half years working under Guardiola, Arteta reckons it is too simplistic to suggest he can replicate the same approach in north London.

“If you copy and paste it is always bad,” he replied when asked if he was looking to replicate Guardiola’s philosophy.

“You have to be around every character and person. Everyone feels things in different way. It is a completely different context with the situations at City and Arsenal. A different concept and players. So I think it would be a bad thing to do from my side.

“He (Guardiola) is braver than any other manager and wants to take more risks and wants to play the way he wants and it does not matter what, he will maintain that line.

City head into Wednesday’s rearranged game – moved after they reached the Carabao Cup final and beat Aston Villa to lift the trophy for the third year in a row – on the back of derby defeat at Manchester United.

But Arteta knows his former colleagues well enough to expect a backlash when he takes Arsenal there.

“They will respond for sure,” he said.

“They are a team that is so used to winning and after every defeat they reacted straight away, that is what I’m saying – we have to be at our best.

“We need to forget about the things they do right, we know how capable they are, the amount of different situations they can put you in on the pitch so we have to focus on our own things and try to do them as well as possible.”