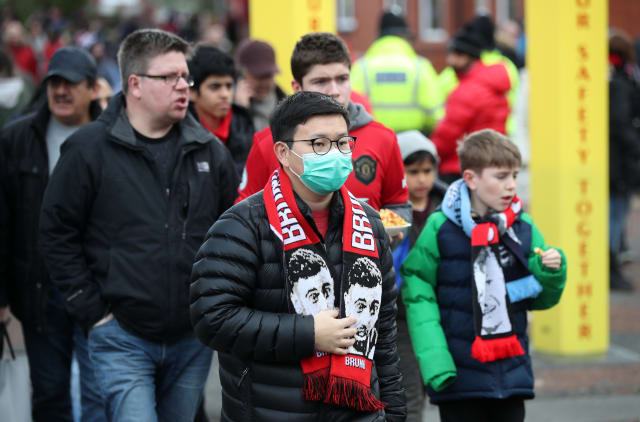 Manchester United’s Europa League match at LASK on Thursday could be played behind closed doors due to fears over the coronavirus outbreak.

Austrian health minister Rudolf Anschober reportedly said on Tuesday that all outdoor events in the country with more than 500 people would be cancelled until mid-April.

The PA news agency understands UEFA has been in contact with both clubs, as well as local and national authorities, ahead of the last-16 first leg in Linz, where local media has suggested the match will be played without supporters.

LASK said in a statement posted on their English Twitter feed: “Health Minister Anschober says that football matches will still go ahead meaning that no @EuropaLeague or @OEFBL games will be cancelled, but may be played behind closed doors.”

Nottingham Forest became the latest English side affected by the Covid-19 virus on Tuesday when their majority owner Evangelos Marinakis stated  “the recent virus has visited me” in a statement.

The Greek businessman insisted he was now following the advice of doctors regarding self-isolation after contracting coronavirus.

Marinakis said: “The recent virus has “visited” me and I felt obliged to let the public know.

“I feel good as I take all the necessary measures and I discipline to the doctors instructions. I strongly advise all my fellow citizens to do the same. I wish all a quick recovery.”

The Bosnia and Herzegovina Football Federation has confirmed ticket sales for this month’s Euro 2020 play-off match with Northern Ireland, which were set to go on sale tomorrow, have been suspended.

Barcelona, meanwhile, are one of several clubs to confirm their European tie will be played behind closed doors.

The LaLiga side confirmed on Tuesday morning the Champions League last-16 second leg with Napoli – scheduled for Wednesday, March 18 at the Nou Camp – will take place without any fans in attendance.

Paris St Germain’s match with Borussia Dortmund on Wednesday is also being played behind closed doors, while Wolves’ Europa League tie at Olympiacos in Greece on Thursday will have no spectators inside the stadium.

UEFA confirmed that news on Monday in addition to revealing Roma’s game against Sevilla in Spain in the Europa League on Thursday will be played without fans in attendance.

Sports bodies met with government ministers in the UK on Monday at a meeting chaired by the Department for Digital, Culture, Media and Sport (DCMS) to discuss contingency plans in relation to Covid-19.

There has been talk Premier League and English Football League games could be played behind closed doors but Gary Neville, the joint-owner of Sky Bet League Two side Salford, has joined those rejecting that as an alternative.

“I do NOT support matches played behind closed doors,” former England and Manchester United defender Neville said on Twitter.

“If it’s necessary to shut down stadiums the associations must find a way of delaying the season and playing the games when it is safe to do so to protect the revenues for clubs that require this income to survive.”

The France v Ireland Six Nations match was postponed on Monday. Ireland had been due to play the match in Paris on Saturday, but it will now not go ahead on the advice of the French government.

The French health minister Olivier Veran announced on Sunday evening that all gatherings of more than 1,000 people are now prohibited in the country, meaning Ligue 1 matches must be played behind closed doors or in front of no more than 1,000 spectators.

All domestic sporting action has been suspended in Italy after prime minister Giuseppe Conte announced at a press conference that the whole country would be on lockdown from Tuesday morning.

The country’s national Olympic committee (CONI) originally made the announcement on Monday, but CONI’s jurisdiction does not cover Italian clubs or national teams involved in international competitions, such as football’s Champions League.

World Snooker confirmed that the attendance in the arena for the Gibraltar Open would be limited to 100 people as a precautionary measure.

The organisers of rugby union’s European Champions Cup and Challenge Cup competitions, EPCR, say the quarter-final ties scheduled for the weekend of April 3-5 are still set to go ahead.

Lancashire County Cricket Club have announced pre-season trips to Dubai and Potchefstroom in South Africa have been cancelled on the advice of relevant health authorities. The club say they are finalising alternative plans on home soil.

The International Judo Federation, meanwhile, has cancelled all Olympic qualification events on the calendar until April 30.